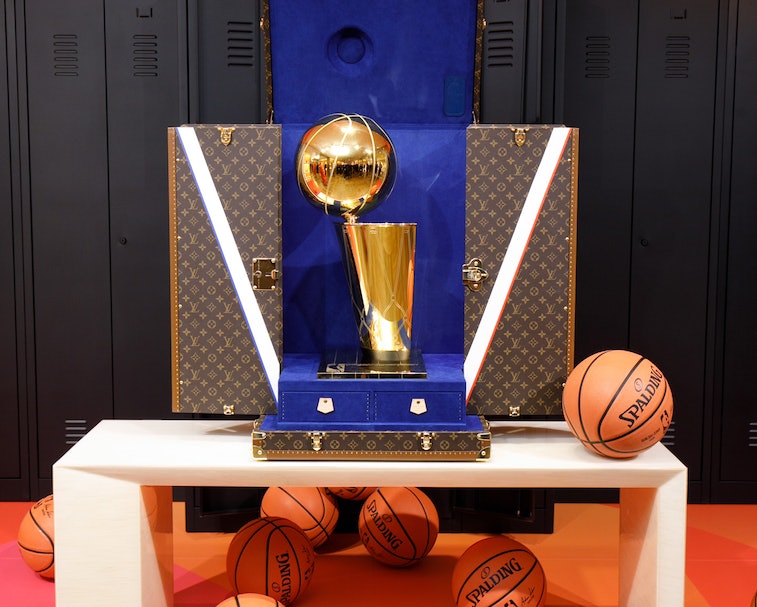 This year's winner of the NBA Finals will receive the Larry O'Brien trophy in some brand new digs. For the first time, basketball's ultimate prize will be presented in a custom Louis Vuitton trunk. The new home for Larry comes as part of a multi-year partnership the NBA inked with Louis Vuitton earlier this year while unveiling the case. The two partners are also set to release a capsule collection designed by Virgil Abloh.

Louis Vuitton has spent the last decade providing housing for some of the world's top trophies, including the last three World Cups, the Roland Garros tennis tournament, and the Rugby World Cup. Last year, the French luxury house also entered into a partnership with the League of Legends World Cup to create an LED-equipped trunk for the trophy, as well as releasing in-game skins and an IRL clothing capsule.

What else is cooking? — Images leaked this week of a Louis Vuitton x NBA sneaker. The wheat-colored shoe looks a hell of a lot like a Timberland boot and has the NBA logo's logo on the tongue and a hang tag that may be intended to be left on like the zip ties for Off-White. So far, the shoe is the only item to surface from the upcoming collection — and it isn't exactly a sneaker to fawn over.

At the very least, it has inspired Patrick Beverly jokes in reference to the time he was filmed working out on the beach in Timbs.

The Larry O'Brien case likely took some serious man-hours — Louis Vuitton has yet to release any details about the bespoke trunk it's created for the NBA, but the brand has divulged the meticulous labor required to produce similar cases. For the League of Legends World Cup, LV said it devoted 25 people and over 900 hours of research, development, and production for the trunk equipped with five "ultra-powerful" LED lights to display the trophy.

The NBA's case doesn't look to have the same bells and whistles while opting for a more classic look, but trust that no attention to detail was spared.