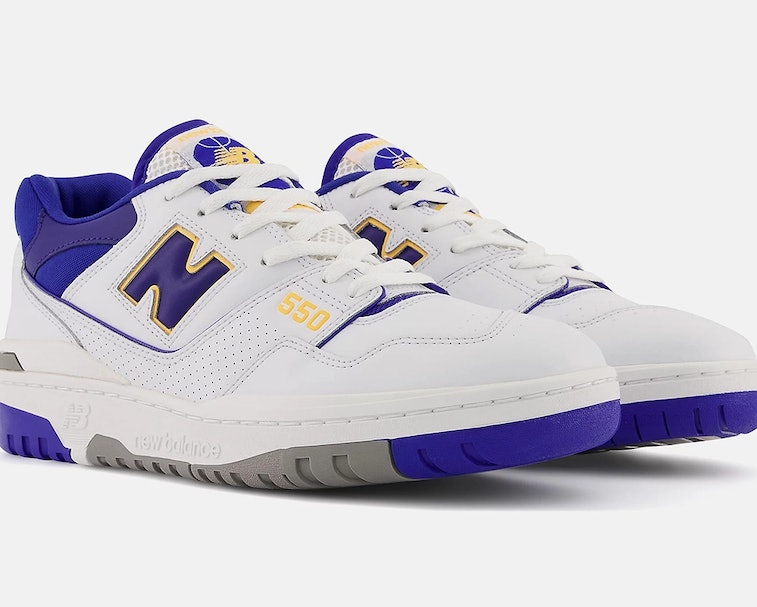 New Balance’s best-selling basketball shoe is getting a worthy revamp. Shortly after Nike announced it would renew its partnership with late Lakers legend Kobe Bryant, New Balance’s 550 sneakers are set to arrive in a recognizable purple and gold color scheme. The retro kicks, while not an official collaboration, make their tribute clear with signature basketball graphics and yellow details.

Since being reintroduced in 2020, the 550 has become one of the most coveted shoes in New Balance’s arsenal. Collaborators including Aimé Leon Dore and Rich Paul have helped build hype for the sneaker, and there’s no doubt the two upcoming “Lakers” color schemes will drive up demand even further. After all, New Balance was prominently endorsed by former Lakers player James Worthy in 1989 when the 550 first debuted.

Love for the Lakers — Both versions of the purple-and-gold sneakers sport a traditional white leather upper detailed with perforations near the midfoot. The first pair sees gold as its primary color and dresses its tongue lining, tongue branding, and midfoot “N” logo in the hue. Its three-part outsole also features touches of gold, though the centerpiece takes on a lighter yellow shade for added dimension. Hits of purple accent the sneaker’s piping, “N” logo, and 550 branding.

In contrast, the second pair sees a vibrant purple cover its heel, “N” insignias, tongue graphics, and outer ends of its outsole. Pops of Lakers yellow highlight the piping, logo outlines, tongue lettering, and 550 branding. To finish off the sneaker, a dark gray fills in its rubber heel accent and middle outsole.

Coming soon — New Balance has yet to announce a release date for its Lakers pairs, although both are expected to launch within the coming months on the brand’s website. Each has an estimated retail price of $120, which is guaranteed to be the lowest price you’ll find these sneakers at. With both shoppers and resellers chasing after the 550, resale value of the model only rises with each new pair. That said, additional color schemes of the silhouette are expected later this year — granted you can cop those either.

Official collaboration or not, these shoes are objectively baller.