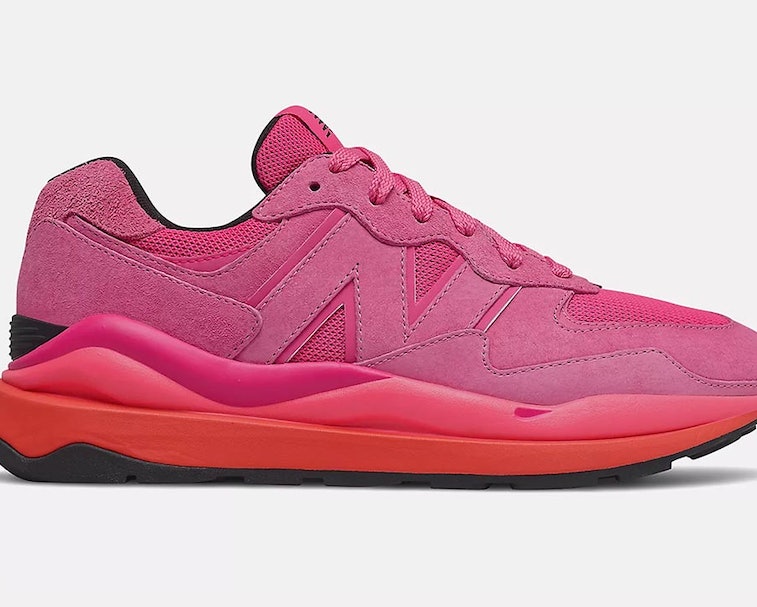 Plenty of sneaker brands are dropping Valentine’s Day iterations of our favorite silhouettes, but some are coyer about the holiday than others. With February 14 just around the corner, New Balance decided to release its "57/40" sneaker in timely colors. While the shoe isn’t officially celebrating V-Day, its pink and orange hues say otherwise.

New Balance’s bright 57/40 even tops previous releases marketed as official Valentine’s Day shoes. Nike dropped an underwhelming single-heart detailed Air Force 1 Low, while we’re pretty sure Adidas just slapped some hearts on its old UltraBoost 4.0 DNA and called it a day. But it’s not all bad — Nike later redeemed itself with an Air Force 1 Low devoted to detail, which included lots of hearts and a secret love letter. And despite its lack of features, New Balance’s hot pink 57/40 makes it to the middle ranks of V-Day sneakers.

Powerfully pink — As a modified, trail-equipped variant of the beloved 574, the 57/40 silhouette balances classic New Balance vibes and modern on-the-go mentality. And with a design inspired by the '80s and '90s, the sneaker fits perfectly into the “future nostalgia” trend. Its enlarged “N” logo and midsole contribute to its contemporary attributes.

The sneaker’s hues resemble Valentine’s Day as much as they do the bright '80s. A “Pink Glo” color takes over the upper almost entirely, dressing the mesh underlay as well as the suede overlays. The shade is met by a more neon-tinged “Neo Flame,” which accents the midsole’s gradient. With the same scarcity as the “Neo Flame” hue, black accents hit the outsole, lining, and heel stabilizer.

New Balance’s 57/40 sees an overwhelming ratio of pink, but its array of textures keep the shoe interesting. Suede, mesh, and laces up top give depth to the monochromatic upper, while the sneaker’s gradient midsole gives the shoe a shape like no other. It’s a Valentine’s Day shoe you can wear all year round.

Cupid says cop — What this shoe lacks in detail, it makes up for in shocking saturation — so if you’re looking for a loud way to declare your love, Cupid’s arrow is pointing this way. New Balance’s 57/40 drops February 6 on New Balance’s website, as well as select retailers. At $100, it’s one of the cheapest V-Day sneakers on the market, though its maximalist design says otherwise. So whether the 57/40 is a gift to your special someone or your special self, consider it a celebration.