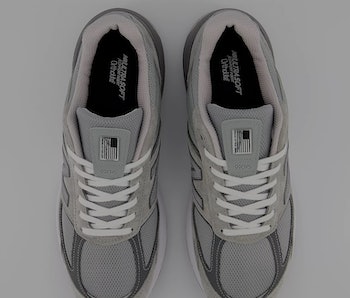 New Balance proudly touts its lines of “Made in USA” and “Made in UK” sneakers as its highest standard in craftsmanship, but a proposed class action lawsuit alleges that the former constitutes an act of false advertisement. Six men filed the complaint in a Massachusetts federal court last week and have accused New Balance of “continu[ing] to knowingly make these misrepresentations because consumers are willing to pay more for products that they believe are actually made in the United States,” according to The Fashion Law.

Federal Trade Commission regulations say that, in order to be marketed or labeled as made in the U.S., a product must be “all or virtually all” made in the country, and any qualifications must be clearly labeled. The suit claims, however, that “as much as 30 percent” of New Balance’s relevant sneakers are made up up of imported parts or are produced using foreign labor.

New Balance does make a small disclaimer on its website and on the underside of its packaging, but the suit argues “no reasonable consumer would expect that small print language on the underside of a packaging or hid in assorted places on a website contain language inconsistent with the representations that the sneakers were ‘Made in the USA.’”

It could come down to the soles — Plaintiffs in the suit against New Balance are seeking monetary damages as well as a court oder certifying the class action. Specifically, the suit accuses New Balance of breaching express warranty, unjust enrichment, and fraud. It also alleges that the company has violated the Magnuson-Moss Warranty Act, which covers warranties on consumer products, as well as several states’ unfair competition or trade laws.

As evidence for its claims, the suit points to a report from the Wall Street Journal that says New Balance sources its soles from two Chinese companies. The plaintiffs, as any sneakerhead would, then say soles are “an important aspect of the shoes” and “not far enough removed from the manufacturing process to be of little consequence.”

In response to the lawsuit, a spokesperson for New Balance told TFL that the company “takes pride in our longstanding commitment to domestic manufacturing — it is a valuable part of our heritage and culture,” adding that, “New Balance seeks to be transparent in all consumer communications, prominently disclosing that where domestic value is at least 70 percent, the brand’s footwear is labeled Made in the USA.”