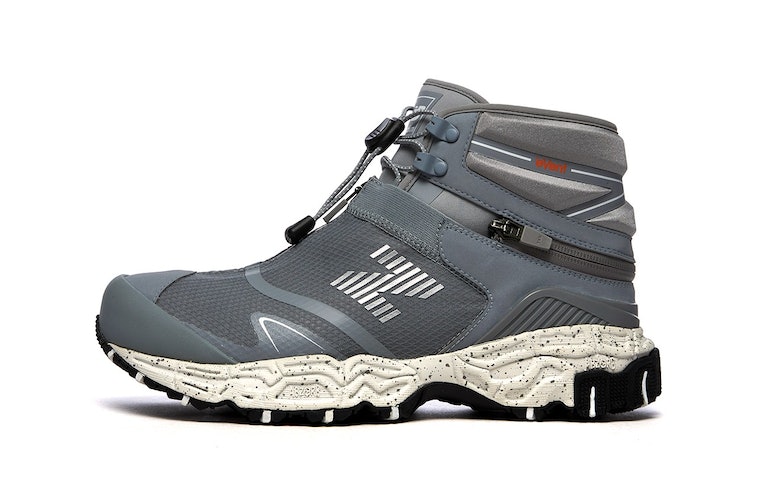 In a year in which outdoor gear was omnipresent in fashion and footwear, there was no cooler boot than the "Niobium Concept 1" out of New Balance's Tokyo Design Studio. The three-in-one sneaker-boot hybrid breaks down into a mule, with the option to strip down further to a slipper available.

Few people have a true need for all three functions, and yet anyone can make use of them. Your boy right here has spent a nontrivial amount of time playing with the zippers on the initial Snow Peak collaboration — and not because the process of transforming the shoe is time-consuming. I strapped into the ankle-length boot for much-needed hikes in my most maddening periods of isolation, freed the butt of my ankles for less liberating but still cathartic strolls around my neighborhood, and lived in the slipper for countless hours inside my apartment. There are at least 40 shoes in my collection, and yet I kept returning the Niobium Concept 1 because it's auspicious for any scenario.

That new, new — Following the Snow Peak collab that launched the silhouette, the Niobium Concept 1 quietly released in striking yellow and all-black color schemes. The price for the in-line makeups stayed the same as Snow Peak's $300 — but even with such a high cost, few footwear pieces provide as much of a return. It's just good math and totally not grasping for justification to say that three Benjis is just one per shoe.

It's with great joy that I tell you New Balance's do-it-all boot will continue its life into 2021, with a smoky gray version slated to release this week. The new tonal "Steel" variant should go with just about everything and will look even better when you add scuffs and grime while trekking into the wilderness.

When fully enshrouded, the Niobium Concept 1 is waterproof and secures snugly with a drawstring lacing system partially covered by a zipper. When worn as a boot or a mule, it has the same beefy sole as the New Balance 801, a more humble outdoor sneaker.

Switching between functions is a breeze thanks to a simple zipper system indicative of Japan's ever-thoughtful approach to design. When you unzip the high-top bootie to go into mule mode, the zipper is already on the right side to equip the slipper that replaces its taller brethren. It may not seem like much, but when you're actually using it you'll appreciate the intuitiveness.

Buy in if you haven't already — Should the smoky Niobium Concept 1 be the one to finally push you over the edge to cop — seriously, what more do you need? — you'll be able to do so at the end of this week. The latest makeup will release Friday, January 15, through select retailers including Sivasdescalzo, End. Clothing, and Sneakersnstuff.

I'm not naive enough to suggest it'll be the last shoe you'll buy this year, but for practical purposes, it certainly could be.