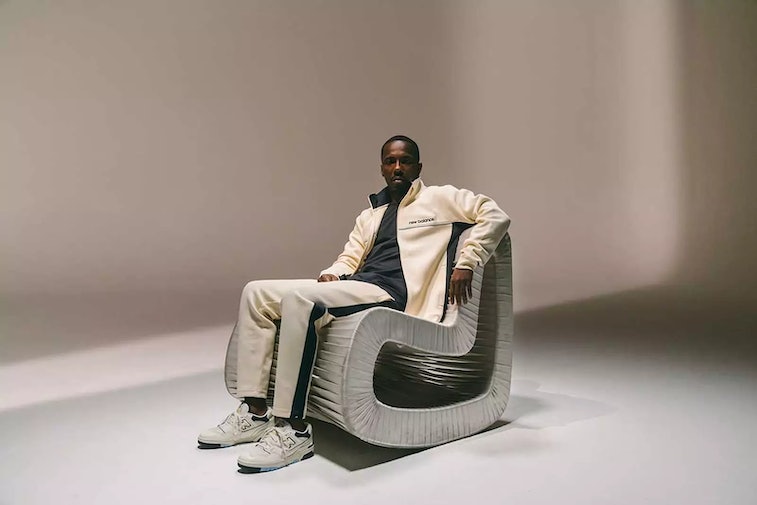 New Balance’s vintage-inspired 550 sneaker has become one of this year’s most coveted shoes, thanks to its multiple makeovers from Aimé Leon Dore. Yet an upcoming collaboration with Rich Paul — sports agent to LeBron James, founder of KLUTCH Sports Group, and boyfriend to Adele — promises a new look for the sneaker, with nods to its basketball roots. The partnership, which also includes apparel, marks Paul’s first collaboration with a brand.

Although competing brands like Nike and Adidas have succeeded with traditional celebrity endorsement deals — including, notably, Nike’s lifetime deal with James — New Balance is moving away from the marketing strategy. Instead, the brand has sought out labels like Staud, Casablanca, and Aimé Leon Dore to reach an indie influencer crowd often referred to as “retired hypebeasts.” New Balance’s collaboration with Paul only furthers this narrative, ensuring the brand has a courtside seat alongside the Swooshes and Three Stripes on the court.

“Partnership over sponsorship” — “Rich’s personal and career journey is one that has truly defied convention,” Chris Davis, New Balance Chief Marketing Officer and SVP of Merchandising, said in a press release. “Whether it be challenging the status quo, inspiring new thinking or valuing the notion of partnership over sponsorship, Rich is an individual who carves his own path and is an example for the next generation.”

Paul reflects New Balance’s philosophy of independence, said a press release, and fits in with the brand’s “purpose-driven collaborations.” Both he and the brand wanted to create something that would embolden the younger generations — ”for boys and girls with creativity, passion and fearless determination to stay true to themselves,” Paul said in a statement.

“Growing up, we always had an affinity for fashion but had very limited resources to express ourselves, and few examples of what success could look like off the court,” the sports agent continued. “When New Balance approached me about a collaboration, more than anything, I wanted to create something to inspire and empower young people coming up behind us.”

Feeling inspired? — To honor Paul’s success off-court — and his influence on the sports industry at large — New Balance’s 550 sneaker has been remodeled with pebbled leather and additional perforations throughout the upper. Its white upper is accented by navy hits on the outsole, heel, and collar, while a bright blue decorates part of the outsole. A yellowed midsole, retro “N” branding, and aged basketball graphics on the tongue tags complete the vintage-inspired sneaker.

Athletic tees, basketball shorts, and full sweatsuits mimic the color palette of the 550, arriving in navy, cream, and light blue shades. The same overlapping basketball graphic that appears on the sneaker is highlighted throughout the apparel in yellow and blue hues. Made with versatility in mind, the collection utilizes high-end fabrics like satin to elevate the sport-inspired pieces.

Prices for the collection range from $40 for graphic tees up to $140 for the 550 sneakers. The full look will be available on December 10 — in limited quantities — at New Balance’s website and Paul’s KLUTCH online store. According to the Wall Street Journal, Paul will not be compensated for the collaboration, nor collect revenue from the New Balance products sold — all profits will be donated to charity, he said.