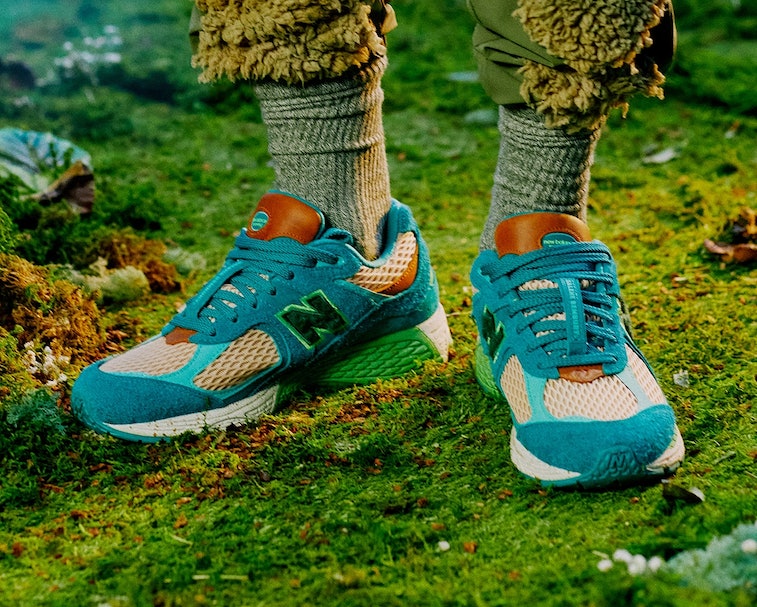 Salehe Bembury has been teasing his new 2002R collaboration with New Balance since earlier this year, and now, the brand has finally come through with official images and release information about the much-anticipated sneaker. Inspired by Bembury’s appreciation for the outdoors, the upcoming 2002R comes dressed in a bright teal suede and is aptly named “Water Be The Guide.”

This collaboration marks Bembury’s second reimagining of the 2002R silhouette. His first iteration, influenced by Antelope Canyon’s color palette, mimicked the desert with suede textures and vibrant orange shades. “Peace be the journey” was the theme of the project, which seemingly carries into the designer’s next nature-inspired foray.

Drip inspired by drip — Shifting from the desert to water, Bembury’s “Water Be The Guide” takes design cues from Arizona’s Havasu Falls. Meant to show the juxtaposition of the cold and warm colors of the area, the sneaker dons shades of aquatic blue, rusty orange, bright white, and neon green.

To further add contrast, hairy suede, leather, and mesh make up the material composition of the designer’s 2002R, which pairs the 2002 upper with a 860v2 sole unit. In true Bembury fashion, the shoe stands out from the crowd with its vivid colors and textures, while a shearling “N” logo on its side reminds wearers of New Balance’s heritage.

BTS with Bembury — Despite the long wait for the sneaker, the 2002R was designed in just two days as New Balance and Bembury decided to whip up something unpredictable. “Given the New Balance heritage I was familiar with, I expected color iterations of 990's, 574's etc., however, the models that [the brand] pulled out… were extremely unexpected,” said Bembury in a press release, noting the design process. Upon seeing the 2002 model, he said, his “interest peaked and the rest is history.”

Following the success of his first desert-inspired 2002R, Bembury has tapped actor Jesse Williams once more to star in the campaign for his “Water Be The Guide” sneaker, utilizing Instagram to premiere the visual. Centered around water — the theme of the shoe — the campaign shows Williams making a beat out of water-filled cups in the middle of a forest. Bembury’s newest design is only shown briefly, implying that more campaigns are to come prior to a drop.

The “Water Be The Guide” 2002R sneaker hits New Balance’s website later this month on June 25. Retailing for $150, the shoe will see a global release, allowing sneakerheads everywhere to quench their thirst — so long as they’re lucky enough to acquire the sneaker when it drops.