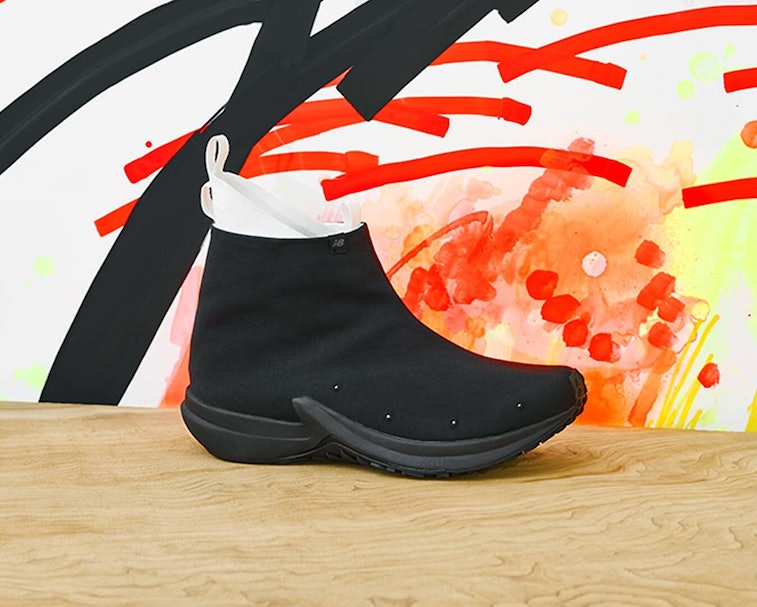 New Balance's Tokyo Design Studio is the innovative division behind the Niobium Concept 1, a three-in-one hiking sneaker and one of the year's most exciting new designs. For its latest release, the studio has produced another cutting edge boot, this time taking inspiration from tabi socks.

The FuelCell Speedrift Tabi TD1 repurposes the sole unit from New Balance's FuelCell running sneakers, using it as a platform for a layered boot with a sock-like fit. Instead of laces, Tokyo Design Studio's new kicks utilize a shrouded "kohaze" hook fastening system that unfurls to expose a removable inner bootie. This clever construction allows for an unblemished upper and as sleek of a boot as you'll see this winter.

For now, the FuelCell Speedrift Tabi TD1 is only available in Japan — but we've seen this before. The Niobium Concept 1, first released in collaboration with Snow Peak, was initially announced exclusively in Japan before a much wider release was revealed. Fingers crossed we see the schedule repeat itself for these killer boots.

Cloth talk — The inner bootie is made from an elastic knit for a snug fit, and it's surrounded by a cotton shell. With little more than the metal hooks to weigh it down, the FuelCell Speedrift Tabi TD1 should be remarkably light — made only more agile by the FuelCell sole.

Tokyo Design Studio's newest creation is available in two monochrome makeups, black with a white inner bootie and white with a black inner bootie. The namesake tabi detailing is slight, not featuring an actual thong to separate your toes but a slight split on the rubber tip. Rocking a proper Tabi boot requires a nontrivial amount of confidence, but the FuelCell Speedrift Tabi TD1 will be much easier to adopt.

Can't wait? — If patience is not your thing, you could skip whatever timeline may bring the FuelCell Speedrift Tabi TD1 to the states and use a proxy service to pick it up from New Balance's Japanese site. It's approximately $267, which is about in line with the cost of the Niobium Concept 1.

New Balance isn't marketing it as such, but I have a feeling the removable inner bootie could be worn on its own as a slipper of sorts. That said, even just one applicable use should be worth the cost. New Balance has ruled sneakers this year, and its Tokyo Design Studio is its most focused source of excitement.