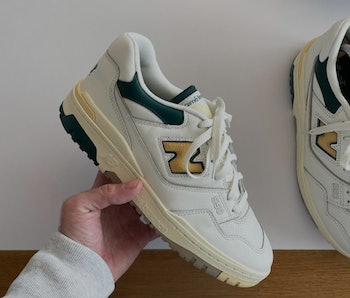 New Balance is best known for its classic, retro styles — but an upcoming partnership with longtime collaborator Aimé Leon Dore might top them all. After the two brought back the brand’s 550 silhouette last fall, they’re planning more vintage-inspired sneakers for the spring. Now, Aimé Leon Dore founder Teddy Santis has teased the latest collaboration on his Instagram, leaving us begging for more.

Santis’ brand reworked New Balance’s 550, a late ’80s basketball silhouette, last year. The sneaker had previously been labeled defunct after its initial release, but with retro styles trending, it’s the perfect time for the 550 to reappear. Plus, almost any shoe given the Aimé Leon Dore makeover is worth copping.

Retro runners — The upcoming pair looks even more vintage-inspired than the ones that came before it. Shared on Santis’ Instagram, the sneaker features a white leather upper with hits of forest green on the ankle collar, tongue, and heel. To add an aged look to the shoe, New Balance’s “N” logo has been crafted with a yellowed, cracked leather. The tongue boasts similarly aged branding, with Aimé Leon Dore’s name written in green and New Balance’s logo printed in a fading yellow.

Yellowed midsoles have been treated to look aged as well, and hits of the forest green complement the vintage look. More New Balance branding decorates the rubber midsole and heel. While we’re feeling the mix of yellow and green tones, more color schemes will definitely join the drop of this vintage-inspired sneaker.

Aged like fine wine — New Balance has been on the retro wave for a while, but this collaboration might send the brand over the top. Consumers have been seeking out quality shoes with aged features like yellowed midsoles, tearaway uppers, and pre-dirtied accents for a while now, as evident by Nike’s destroyed Carpet Company Dunk or Plessume’s pre-distressed bootleg sneaker. The contrast of exclusivity and a “careless” sneaker look seems to be the ultimate definition of cool.

Getting the aged 550 sneaker won’t be an effortless feat, though. While we’re expecting the silhouette to retail for $130, as it did in the fall, demand is already building. Aimé Leon Dore and New Balance’s last collaboration is selling for up to $800 on StockX, and we can’t imagine what this arguably better pair will run for on resale sites.

No release details have been announced, but Santis confirmed in his caption that the sneaker will be released this spring. If you’re able to score, know you’ll have a pair coveted by many.