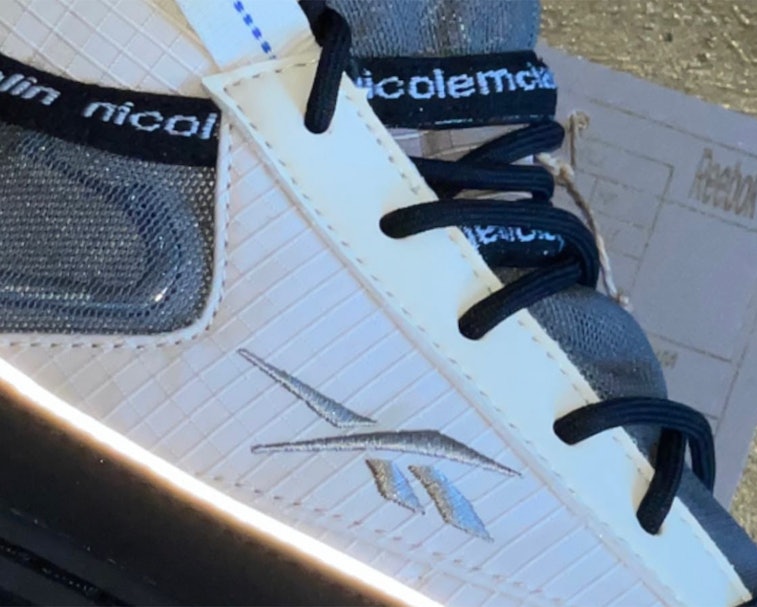 Nicole McLaughlin, the wildly popular upcycling designer and artist, has taken to Instagram to give a sneak peek of her very own sneaker from Reebok.

A close-up shot posted to her stories reveals an outdoor friendly silhouette featuring ripstop nylon, reflective piping, and a little storage pouch used to house a carabiner. McLaughlin’s name also appears prominently through elastic bands on both the pouch and tongue.

Giving McLaughlin her own sneaker is a shrewd move by Reebok, as her eccentric designs have helped her to garner more than 785,000 followers on Instagram. The unnamed Reebok sneaker would mark her second sneaker collaboration following a heavily accessorized pair of Crocs tailored to the outdoors, and she’s also worked closely with brands including Arc’Teryx, Puma, and Hermes.

Going back to where it started — Making a sneaker with Reebok forms a neat narrative loop, as she previously worked for the company as a graphic designer. While there, she began experimenting with upcycled designs on her own time and often with discarded Reebok materials before eventually branching out on her own as a full-time designer and artist.

McLaughlin’s upcoming sneakers could also become a first landmark of sorts for Reebok under its new ownership. Adidas just recently completed its $2.5 billion sale of the company to Authentic Brands, and creative director Kerby Jean-Raymond of Pyer Moss fame left his post amid the shakeup and before he really even had a chance to leave his mark.

If Reebok is going to rise once again to a place where it can compete with the likes of Nike and Adidas again, it’s going to need strong creative voices backing it. McLaughlin won’t be enough on her own, of course, but it’ll be a step in the right direction as we eagerly await word of a release for her kicks.