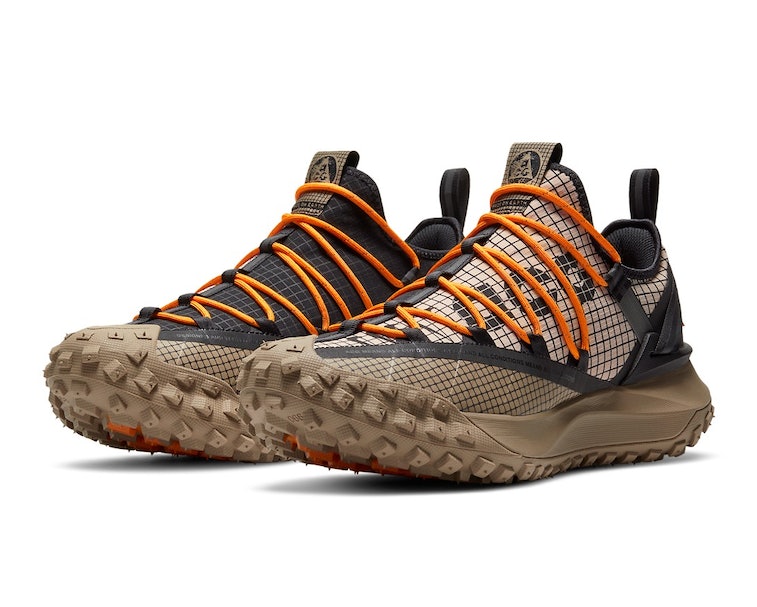 Nike ACG's Gore-Tex-equipped "Mountain Fly" hiking sneaker has been a runaway hit, selling out almost everywhere it's been sold. The high-top boot hybrid takes the carbon fiber plate from Nike's top-of-the-line Next% marathon runners and combines it with React cushioning and a hawkish lugged outsole that extends onto the toe.

From a functional standpoint, the Mountain Fly is tad bit overkill for anything but outdoor exploration — but its high-tech and high-vis appearance makes it an equally appealing choice for city life. The upper's grid pattern calls back to Hugh Errolson-era ACG without sacrificing the trail bonafides that have defined the subline under his successor, James Arizumi.

Now, the Mountain Fly will be available as a refastened low-top sneaker even better suited for more casual wear. The outer bootie and sock-like collar are now gone, revealing a ripstop upper split down the middle into two patterns. There's no articulated tongue, and the rope lacing system extends almost entirely across the upper.

Slip on with ease — While it doesn't feature FlyEase technology, the Mountain Fly Low should be relatively easy to get on and off thanks to the wide opening without a proper tongue to navigate. Pull loops appear on both sides of the entry point, and the laces are what Kanye West once described to an old lady as "after the fact."

The only downside to the new low-top version is that it doesn't have a Gore-Tex membrane to hold you down in the rain or snow, but the upper is still water-resistant. You're more likely to wear the Mountain Fly Low in milder conditions, although the same treading pattern makes it just as useful on unstable surfaces.

Two colors are coming soon — The Canadian boutique Haven got black and grey version of the Mountain Fly Low that's already sold out, but Nike has two others set to release through its website on February 11 for $180.

One pair is all black save for a pink ACG logo on the heel, while the other mixes black with safety orange and shades of brown. Whether you're bound for a mountain or just co-opting the look, you'll be hard-pressed to find a shoe tougher in function and aesthetic.