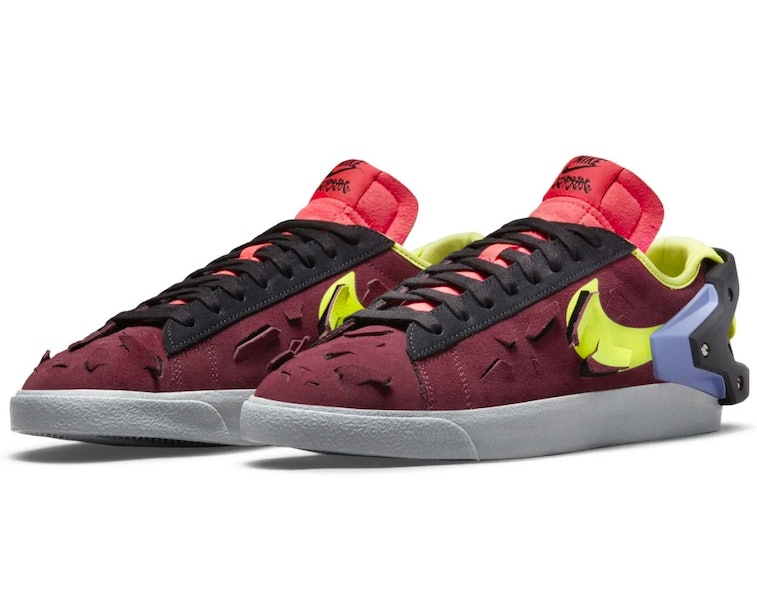 Acronym is one of the rare brands that can seemingly do no wrong, from its library of inventive technical apparel to its history of dynamic Nike collaborations. But such faith in the brand is about to be put to the test with the reveal of its next sneaker collab, the Blazer Low.

Images have surfaced for Acronym’s futuristic take on the Blazer Low, which looks to be straight out of a sci-fi flick and not necessarily a good one. A bulky plastic cage is affixed to the heel with no discernible function outside of giving the appearance of an exoskeleton. Screws anchor the two-piece contraption into place, meaning you could shed a layer if you’re looking to pare down the protrusion — but there are still plenty of gripes to be had with the nearly 50-year-old shoe taken into the future.

Battle scars cover the upper with partial cut-outs hanging off — including on the Swoosh, which has been printed instead of stitched on. It’s possible that both the wounds and the cage could work separately on another silhouette, but together on the Blazer Low, they’re doing entirely too much. It’s a rare miss from Acronym’s tech lord founder Errolson Hugh.

Can a hot colorway save the sneaker? — Despite a risk or two too many, Acronym’s Blazer Low does look significantly better in one variant than another.

The suede version features an unsightly mix of a burgundy upper with neon yellow and pink accents, as well as a black eyelets, black and blue cage, and grey outsole. The canvas version, however, is significantly less chaotic with just black, white, and a green that looks like it could glow in the dark. Green anchors the primarily black upper on the sole and sockliner, which extends outside the shoe to form a mustache flap — and if you remove one of the cage pieces, perhaps the sneaker could still be redeemable.

A release date has yet to be set for Acronym’s Blazer Low, but it is expected to fetch $140 a pair sometime in the coming months. The sneaker could very well fly under the radar, so if you’re in love with it against all odds, picking up this bizarre creation could be a cinch.