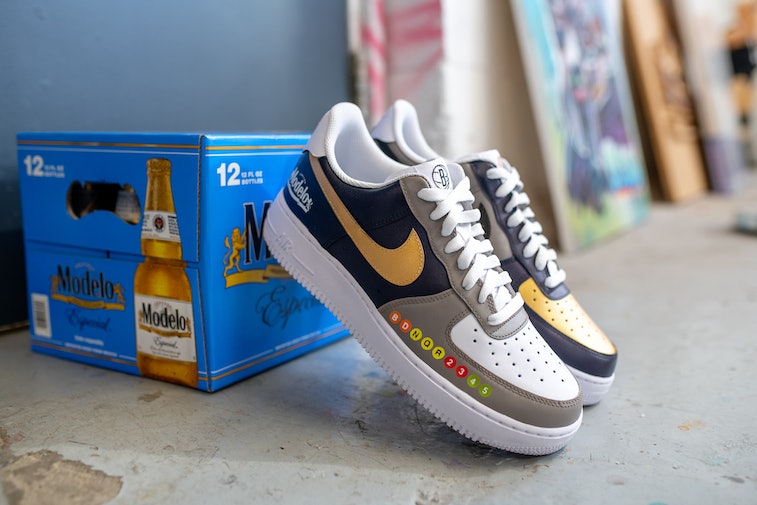 If you’re a Brooklyn Nets fan — or more likely, enjoy the taste of Modelo beer — there’s a pair of exclusive sneakers calling your name. As the official beer of the Brooklyn basketball team, Modelo linked with New York footwear artist “Mache” to customize a limited number of low-top Air Force 1 shoes celebrating the beer and basketball partnership. Only 15 of the sneakers, complete with Modelo and Nets branding, are up for grabs.

Although the idea seems random, Modelo approached Mache with the opportunity to design the shoes as he shares similar values to the brand: Hard work, perseverance, resilience and celebration are all part of Modelo’s “Fighting Spirit” mantra. According to a statement from the beer company, Mache tapped into his own Fighting Spirit while creating the sneakers, pushing himself creatively to design a unique concept which brings to life the partnership between the two brands.

Minimal supply, maximum detail — Sneakers were a great canvas for Modelo to pick — fans can wear the shoes whether they’re watching a basketball game, enjoying a beer, or doing both simultaneously. The footwear itself celebrates these occasions through branding for both Modelo and the Nets, respectively placing one organization’s logo on each shoe’s heel.

These AF1s are littered with brand details going beyond the logos, though. On one sneaker, a gold Modelo lion sits on the heel tab, while gold toe boxes represent the beer’s signature gold foil. Taking on a mismatching look, the alternate shoe features BK branding and a gray and navy upper, while its mudguard touts the New York subway lines that fans take on their commutes to the Barclays Center to watch the Brooklyn Nets play.

Despite their varying branding, both sneakers boast a cohesive look thanks to their similar color blocking. Their design takes on Modelo’s signature colors of white, gray, navy, and gold, with one shoe sporting a gold Swoosh and the other dressed in navy.

How to score — Whether you prefer the basketball team or the beer, you’ve got to admit these shoes are baller. But there are only 15 of the Air Force 1 sneakers available, and much like the Nets, you’ve got to win a game to earn your kicks.

New York fans who are 21 and older can enter to win the custom Modelo x Brooklyn Nets sneakers through a website specially made for the occasion, or by scanning a QR code at participating stores. The sweepstakes run from now until April 30, when the tap runs dry.