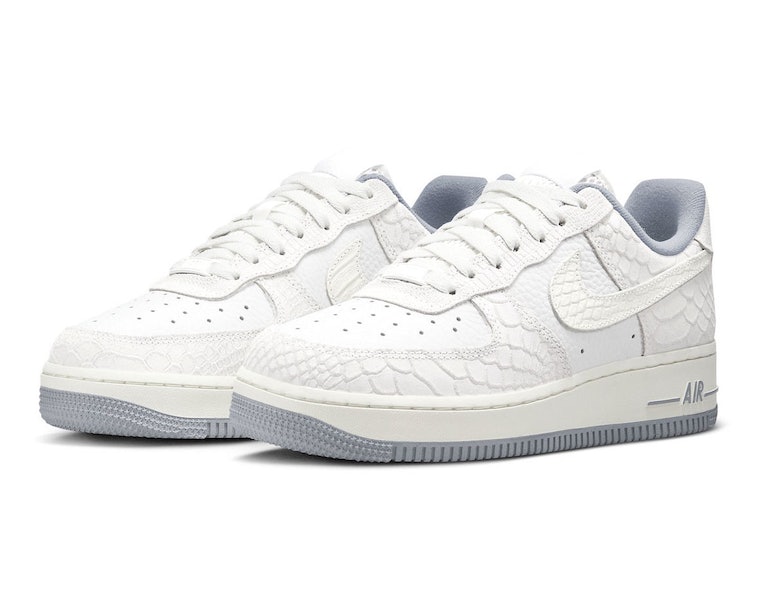 Celebrations for the Nike Air Force 1’s 40th anniversary are in full swing. Following up a pleated and bow-adorned AF1, Nike has another elegant upgrade for the classic sneaker on the way with a serpentine twist. Snakeskin-like leathers cover the upper and take inspiration from the rare white python.

No ophidiophobia here — There aren’t many versions of the sneaker that can top its traditional white leather makeup, but this latest pair comes pretty close. Inspired by the leucistic white python, the sneakers are given an all-white white look for its upper. Tumbled leather is used alongside slightly differing snakeskin patterns across various panels. And even though Nike has a habit of peel-away uppers, this exterior won’t peel off like the reptile that informs it.

A thick white midsole serves as a base for the sneakers, while a shade of light blue-gray hits the collar, outsole, and midsole Air branding. Even the tongue sports a creepy mesh material invoking the snake — making quite the commitment to scaly surfaces.

Into the snake pit — Serpent sneakers are all the rage these days with other pairs donning the slithering creatures’ skin. In February, Tyler, the Creator and Converse released a double pair of snakeskin Chuck 70s in blue and pink, while Drake teased a scaly gray Nike x Nocta Hot Step Air Terra last year.

On the Nike front, the upcoming Air Force 1 is just the most recent addition to the Swoosh’s snake family. The brand has tapped collaborators in the past, including a Dunk Low with Undefeated and the luxe A Ma Maniére Air Jordan 2 with subtle snake hints. Prepare to see even more of the motif with upcoming Dunk Low and Air Huarache releases.

There isn’t an official release date for the “White Python” Air Force 1 just yet, but it should hit Nike and select retailers in the next few weeks. White pythons aren’t venomous, but competition from other sneakerheads pursuing the AF1 could be a different sort of danger.