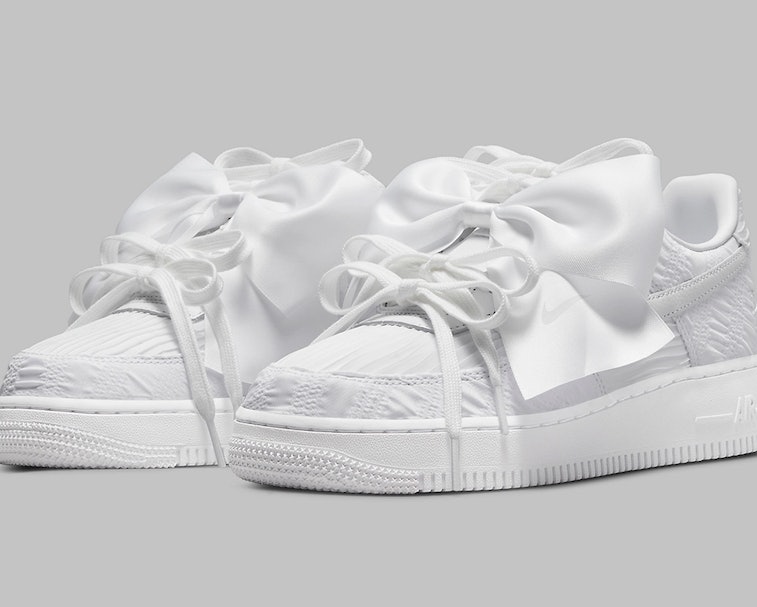 Nike’s Air Force 1 sneaker celebrates its 40th anniversary this year, and it’s doing so with a collection of makeovers. The last two months have seen the all-white staple elevated with oxford details and pearls, while collaborators like Billie Eilish have modified the sneaker with velcro straps. Each revamp seems to push the Air Force 1 (and its wearers) to new limits.

The latest version of the sneaker is no exception. Oversized bows, lace eyelets, and pleated white panels now cover the shoe’s upper, resulting in a bold yet delicate AF1. An hourglass logo — first seen on another unreleased Air Force 1 — sits at the heel, suggesting the ornate sneaker is part of a larger women’s collection.

Un-bow-lievable — With “one to rock and one to stock,” sneakerheads have long treated the AF1 as a classic shoe capable of topping off any outfit. Garish bows and pleating put that mentality to rest on the upcoming sneaker, however, which may be harder to style considering its statement details. It’s nearly impossible to ignore the gigantic white bow looped into the shoe’s lace eyelets as its ribbon covers much of the tongue and Swooshes. Nike has accordingly splashed another Swoosh onto the bow for good measure.

Although it seems to be the selling point of the sneaker, the huge decoration is presumably removable. Official Nike imagery shows the bow on its own, as classic shoelaces fill in the remaining lace eyelets. For a less outrageous look, the laces can be tied into smaller, individual bows.

Pleated white panels replace the Air Force 1’s classic white leather upper, boasting a texture similar to linen or paper ribbon. Every other panel seems to take on a ruched look, while those in between stick to classic pleating. The white cloth texture makes the sneaker feel ready for summer, granted the reimagined AF1 releases by then.

Coming soon — Nike has yet to announce a launch date for its bow-adorned Air Force 1, although official imagery is a good sign the sneaker will drop soon on SNKRS. You’ll want to keep an eye out for other AF1 models flaunting an hourglass logo at their heel as they’ll be part of the same sneaker pack. Time is ticking!