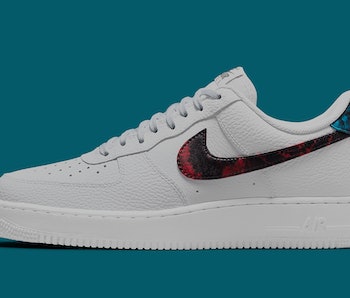 Tie-dye was one of the defining trends in streetwear last year, and early signs suggest it isn't going to go anywhere in 2021. Nike is preparing to release an Air Force 1 Low with the psychedelic treatment, although in relatively reserved form.

Just the Swoosh and mustache have been hit with tie-dye print, leaving the rest of the sneaker white for a slight twist to the quintessentially classic shoe. The color blocking is what really makes the Air Force 1 stand out, as the blue tie-dye mustache pairs perfectly with the Swoosh done up in red. It's almost like what BAPE does with its more outlandish Cloud Camo kicks — just reserved and thus better.

Other tie-dye AF1s have been much noisier — This isn't the first time Nike has done up its eternally cool low-top sneaker in tie-dye. The ubiquity of the counterculture-born print last year could be seen across the board from Beaverton, including a black tie-dye Air Force 1 and a multi-colored pair with sulfur tie-dye also slated to release this year.

Those two sneakers are almost too on-trend, but this more subtle two-tone pair allows you to adopt the groovy print without it completely taking over your feet. Some of my favorite Air Force 1s have been the ones with only slight deviations from the all-white tumbled leather format, including the undersung Roc-a-Fella Records collab from 2017, and I'm hoping I can add these to my rotation without continuing my wholly unsuccessful record on the SNKRS app.

Stay tuned for release details — We're in the early, ripping images from the backend phase of this shoe — so we'll have to wait for Nike to announce its official release details for its new tie-dye Air Force 1. Historical precedence says it should be dropping in the coming months, and at most, it should run $130.

In the meantime, another worthy Air Force 1 Low is dropping in the form of popcorn on March 7 — just as movie theaters are beginning to open up again across the U.S.