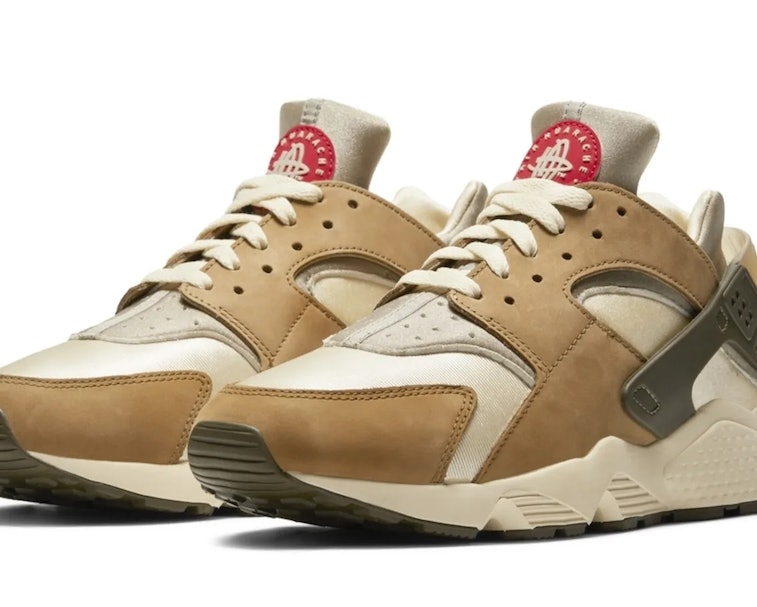 Plenty of brands are channeling retro styles this year, and Stüssy is no exception. The streetwear brand is partnering up with its old friend Nike to revive its Stüssy x Nike Air Huarache LE, which originally released in 2000. And now, we finally have a date for when the highly-coveted kicks are dropping. But will we even be able to cop?

We’ve seen a variety of Nike re-releases already this year, with the brand itself reviving the Dunk silhouette and re-dropping its 2006 Clot collab Air Max 1 "Kiss of Death" shoe. But Stüssy’s Huarache relaunch is meaningful — the Air Huarache LE first released in 1991, which means this year marks the sneaker’s 30th anniversary. And Stüssy’s 2000’s rework of the shoe, while not an official collaboration at the time, kicked off the next two decades of streetwear partnerships that have helped shape today’s sneaker industry. It also ushered in neutral tones, particularly for the Air Huarache that was known for its neon colors and white leather.

A lasting design — After a teaser surfaced in Stüssy's Spring '21 lookbook earlier, fans were eager to get a closer look at the retro sneaker. Initially created by Stüssy UK’s Michael Koppelman and Nike’s Fraser Cooke, the brand’s 2021 Air Huarache LE sticks to its original shades, with a brown “Desert Oak/Reed/Light Straw” hue and a green and white “Dark Olive/White/Varsity Maize/Ivory” shade.

With a palette identical to its original launch, it’ll be hard to differentiate the 2021 Air Huarache from its 21-year-old counterpart. But this time, the sneaker’s Nike branding is backed by the sportswear giant, meaning the shoes will only be harder to cop. Well, that and the fact that drops are susceptible to bots now.

Both initial shades will drop together, according to Stüssy. Each adult pair is set to retail at $120, alongside youth sizes at $80 and the toddler iteration at $60. No matter the size of your feet, however, you’ll have to move fast to grab a pair — otherwise you’ll be stuck paying thousands for resale.

Cop if you can — Your chance of scoring the 2021 Stüssy and Nike Air Huarache LE is greater than looking for the original, though. Stüssy confirmed its collaborative sneakers would drop February 12 at 10 a.m. P.T., available at select Stüssy Chapter stores, select Dover Street Market stores, and at the brand’s website.

Right now, it doesn’t look like the Stüssy and Nike Air Huarache LE will drop on the SNKRS app, which might be a blessing in disguise. With the platform’s recent string of bugs, it looks like Stüssy is trusting its own retailers with a drop of this magnitude. Of course, you’ll still face a lot of competition there — but if you lose out on the Huaraches, you’ll have no one to blame but yourself.