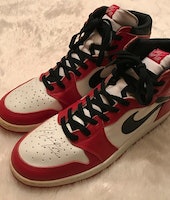 That's the "Buy it Now" price for these rare sneakers.

The Air Jordan 1 has come a long way since its debut in 1985. Now a classic and iconic silhouette, the shoe’s original models and shades have only increased in scarcity and price. But a new listing on eBay has surfaced a pristine version of the original sneaker — for only $1,000,000.

Talk about a headline. The sneaker’s pricing landed it on Complex’s Instagram, where haters descended upon the Air Jordan 1, claiming the shoes weren’t worth the listing price and doubting the sneaker’s preservation. Other commenters appreciated how the million-dollar footwear came with free shipping. Truly, its existence is mind-blowing.

Jump for these Jordans — Said Air Jordan 1 is unworn, signed by Michael Jordan himself, and boasts a certificate of authenticity from eBay. According to the listing, there are only 15 to 20 sets of deadstock pairs in this SKU, with only two — this one being one of them — publicly verified and decorated with the iconic rookie signature.

The listing goes on to claim these Air Jordan 1s aren’t just original, but rather made for Jordan himself. They appear in the mismatched size 13 and size 13.5 combination favored by “his Airness,” as the seller calls Jordan. This size guarantees the shoe’s authenticity, the listing claims. There is no such thing as an original Air Jordan size 13.5 for retail sale. But why would Jordan sign a pair of shoes specifically made for him, unless resale was always part of the plan?

Another 1985 Chicago AJ1 listed on eBay, perhaps the other deadstock pair, boasts Jordan’s signature too. But this pair is priced at $50,000, since they lack eBay’s guaranteed authenticity and the same preservation quality as the million-dollar pair. Consider them half-off, but buyers beware: This sneaker does not come with free shipping.

What is Jordan worth to you? — Certainly, the million-dollar shoes are a collector’s item — and most serious collectors are willing to pay the price. In 2020, a pair of Michael Jordan’s game-worn, autographed sneakers from his rookie season sold at an online Sotheby’s auction for a then-astonishing $560,000. And while eBay is no Sotheby’s, we can totally see someone buying the unworn AJ1s at nearly double that price.

Right now, the likes of Travis Scott, Elon Musk, and billionaire teen resellers are all mulling over the possibilities of the pristine 1985 sneaker. Will the next owner tarnish the Air Jordan 1 by wearing it to flex on the 'gram? Or will they keep the shoes in a temperature-controlled glass box at the center of their sneaker vault?

If you’ve got the cash, you can decide. The seller of the million-dollar shoes is open to offers — as long as they’re reasonable, of course.