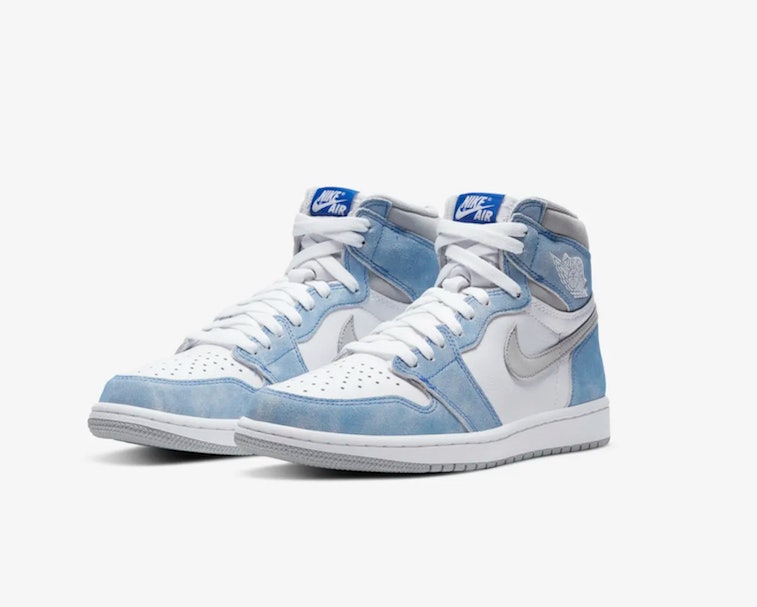 Nike has officially unveiled its “Hyper Royal” Air Jordan 1 High, just in time for spring and summer. Featuring a distressed blue suede and a subtle gray Swoosh, the silhouette is a clean and stylish alternative to the beloved “University Blue” AJ1 — which sold out in seconds, as most Jordan retros do nowadays, and has become one of the most sought-after shoes of the year.

We’ve got company — As part of Jordan Brand’s summer Air Jordan Retro lineup, the Hyper Royal Air Jordan 1 is set to drop alongside other highly anticipated silhouettes. Styles include women’s exclusives like a “Metallic Purple” Air Jordan 1 High and a new “Rust Pink” Air Jordan 3, as well as the “White Oreo” Jordan 4, the “Electric Green” Jordan 6, the “Lagoon Pulse” Jordan 12 Low, and the “Gym Red” Jordan 13.

The Hyper Royal is also one of three Air Jordan 1 High sneakers, with a neutral “Shadow 2.0” and vivid “Light Fusion Red” makeups joining the blue suede shoes. In addition to the new releases, popular styles like the Air Jordan 7 “Flint” and the women’s exclusive “Citrus” Air Jordan 11 Low are coming back, and the Air Jordan 11 “Legend Blue” will return but this time as a low-top sneaker.

Most styles arrive in full family sizing and extended women’s sizing. Hopefully, the move will not only allow more women to cop the sneaker, but also broaden the number of consumers able to purchase the shoes for retail price. Sizes much smaller or bigger than average often sell out quickly because of their limited supply, and cost nearly double the average resale price because of their scarcity. Adding extended sizing works in favor of both the consumer and the sportswear brand.

This sneaker looks familiar — With its distressed blue suede overlays, the Hyper Royal AJ1 bears a striking resemblance to the Carpet Company Dunk, which sported a crisp white leather base and swirling blue mesh fabric uppers — but that isn’t the only sneaker the Air Jordan 1 mirrors. The newest shoe also employs a similar construction as the highly coveted Air Jordan 1 High “Turbo Green,” released in early 2019. Now reselling for up to $1,000 on StockX, the green sneaker only foreshadows the demand — and value — of the upcoming Hyper Royal.

Unlike its predecessor, though, the blue Air Jordan 1 doesn’t boast a matching suede Swoosh, instead opting for a smooth gray leather style. The same gray material decorates the collar of the shoe and its tread, lightly contrasting the white leather uppers and nylon tongue. White laces continue the neutral theme — but would look great switched out for bolder pink or blue versions.

To keep the sneaker from looking too plain, distressed suede panels dress the upper, giving it a tie-dye-esque look. The marbled blue overlays are more refined and eye-catching than classic blue leather panels — as seen on the hyped “University Blue” AJ1 — and allow the white Air Jordan Wings branding to subtly stand out.

Sizes for everyone (if you can cop) — The Hyper Royal Air Jordan 1 is set to drop on April 17 at 10 a.m. ET. Arriving through SNKRS, the silhouette will cost $170 for adult pairs — including women’s extended sizing — and $130 for grade school pairs. It’s not clear whether Nike will impose a lottery-based draw on the sneaker, but seeing as demand is growing rapidly, the move looks likely.

Release dates have yet to be announced for the rest of the sneakers in Jordan Brand’s summer lineup, but you can look forward to the drops by browsing the styles below.