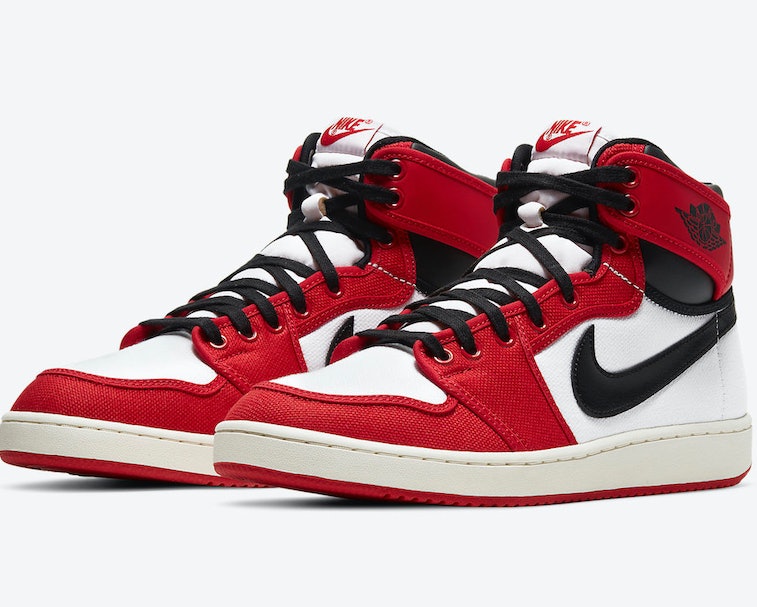 For months, sneakerheads have speculated an upcoming Air Jordan 1 KO "Chicago" release. Now, the SNKRS app has confirmed the shoe will arrive soon as part of Jordan Brand’s spring lineup. Staying true to its roots, the sneaker features canvas, leather, and white, red, and black hues.

First launched in 1986, the Air Jordan 1 KO differentiates itself from the typical AJ1 by sporting an upper made of canvas instead of leather. Jordan Brand hasn’t released the silhouette in a while, especially in the coveted “Chicago” color — making this launch highly anticipated. The last time we saw an Air Jordan 1 KO “Chicago” iteration was in 2014, following retro models in 2011 and 2012. Seven years later, consumers now have another shot at copping the silhouette for retail price.

Keeping it OG — Both Nike and Jordan Brand have re-released plenty of older models to keep up with vintage and distressed sneaker trends. It’s an easy way to keep consumers satisfied — giving them another chance to score their favorite designs — while also ensuring minimal effort and maximum profit on the brands’ end. And with the latest AJ1 KO sneaker keeping its original makeup alongside increasing hype, Jordan Brand seems to understand the old adage: If it ain’t broke, don’t fix it.

A white base dresses the forthcoming pair’s underlays, while red overlays accent around the toe, eyelets, and across the collar. Black hues hit the Swooshes, ankle panels, and laces, also featured on the sneaker’s signature “AJKO” branding on the Wings logo. More red details put the finishing touches on the tongue branding and outsoles. All components of the shoe’s upper are made of cloth, while underfoot, midsoles nod to the silhouette’s 1986 debut with their slightly yellowed, vintage-like look.

One of the most coveted releases yet — The SNKRS app has confirmed the official launch of the retro model, slated for release on May 12 at 10 a.m. ET. Like many other popular drops, the Air Jordan 1 KO “Chicago” will be subjected to a lottery-based draw, leaving your sneaker fate up to, unfortunately, the SNKRS app algorithm. At the moment, though, buying retail is your best bet — the app has the shoes available for $140, while most sizes of the 2021 pair are already listed on StockX for over $1,000.