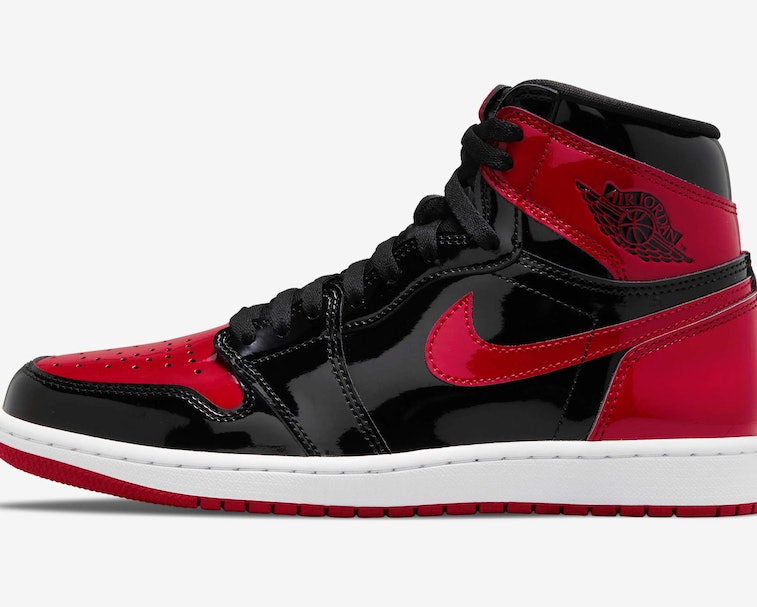 The final highlight of Jordan Brand’s 2021 holiday lineup is set to arrive just before the new year, as the Air Jordan 1 “Patent Bred” will release this week after multiple delays.

A patent leather makeover sees the Air Jordan 1 in its original color scheme with a new luster, following the same formula as the 3.0 version of the AJ1 “Shattered Backboard” released two years ago. The same shiny material was also used from the outset on the Air Jordan 11, the first time either patent leather or carbon fiber had ever been used on a basketball sneaker.

Black and red, aka “Bred,” was one of the two original color variants for the Air Jordan 1’s launch in 1985 along with the white and red “Chicago” version. Before wearing his own signature sneaker, Michael Jordan was hit with repeat fines for wearing a similar black and red version of the Nike Air Ship because it didn’t conform to NBA regulations requiring shoes matching team uniforms. Thus the legend of a “banned” sneaker was born, giving Nike a marketing gift on top of the craze for the league’s then-most promising rookie.

A new classic — Along with the Air Jordan 11 “Cool Grey,” which released in early December, the Patent Bred 1 was the most anticipated of this year’s Jordan Brand releases. The latter is the closest thing we’ve seen to a re-release of the Air Jordan 1 Bred since 2016, and the original color schemes for the sneakers are the most coveted of all non-collaborative Air Jordans.

The fact that it’s not a one-to-one recreation of the Air Jordan 1 Bred might make demand and resale prices for the patent leather version slightly lower, but make no mistake that there will still be plenty of competition for the sneaker come this Thursday, December 30. You will have plenty of chances to purchase for $170, however, with stores including Foot Locker, Finish Line, and Eastbay all getting stock in addition to Nike’s SNKRS app. You can also enter raffles from boutiques such as Bodega and Sneaker Politics to increase your odds of landing the new spin of the most classic Air Jordan of all.