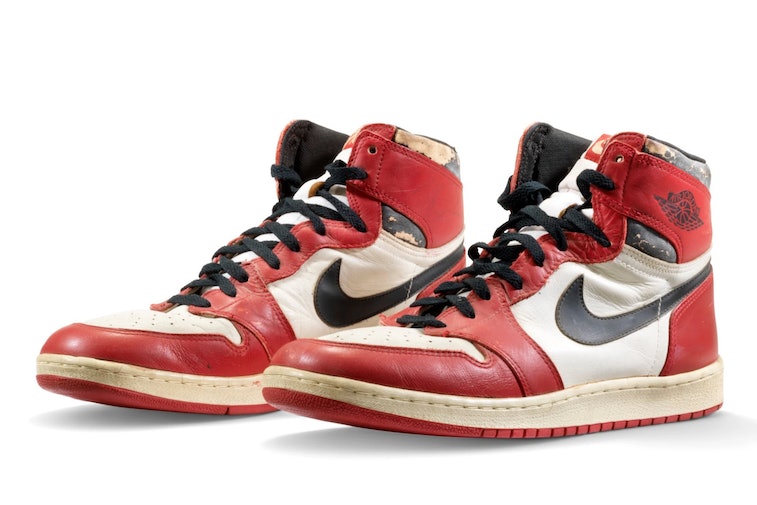 People already treat sneakers more like commodities than something to wear by gobbling them up and flipping them on the resale market. Late capitalism has strengthened its hold on the culture with the emergence of platforms like Otis, which allows investors to buy "shares" in a sneaker that they'll never have in their possession.

That's where the game-worn "Shattered Backboard" Air Jordan 1, which sold for $500,000 at auction earlier this year, has wound up. Otis will soon open up the shoe for investment at $10 a share, valuing the pair of sneakers at $700,000. Including the buyer's premium, the AJ1s sold for a sneaker record total of $615,000 through Christie's.

How do sneaker shares work? — Otis allows investors to trade shares amongst each other, similar to the stock market. And if someone holds onto their shares until Otis decides to sell the sneaker they've invested in, they'll receive pro-rata returns.

The benefit of investing in this way, as opposed to typical reselling practices, is that it doesn't require as hefty a buy-in. It also spares the investor from dealing with any of the logistics of making a sale, providing a passive source of income for those who play the market right. Knowing much or even caring about sneakers isn't a requirement — which goes to show just how far sneaker culture has strayed from its roots.

Otis acquires the sneakers available for investment on the platform, which suggests it was the winner of the Christie's auction. In the listing for the "Shattered Backboard" 1, Otis only says it "ultimately acquired" the pair.

The legend of the Shattered Backboard — The sneaker at hand is a rare mid-cut Air Jordan 1, which never went on sale to the public, in the white, red, and black color scheme known as "Chicago." Jordan wore the pair in an overseas exhibition game against Stefanel Trieste in which he famously shattered the backboard during a dunk. A piece of said glass is still embedded in the outsole.

30 years after the fact, the "Shattered Backboard" Air Jordan 1 released as an ode to the iconic moment from early in Jordan's career. The orange, black, and white color treatment is pulled from the Italian team Jordan was playing against, and it's quickly become one of the most coveted sneakers that he never actually played in.

Jordan gave the original pair of "Shattered Backboards" to Gianni Bertolitti, captain of the opposing team, and signed both sneakers on the inner collar. Once they went up for auction, they became the most expensive pair of sneakers ever sold.

Otis will open up investments for the shoe in the "coming weeks." You can sign up for updates right here.