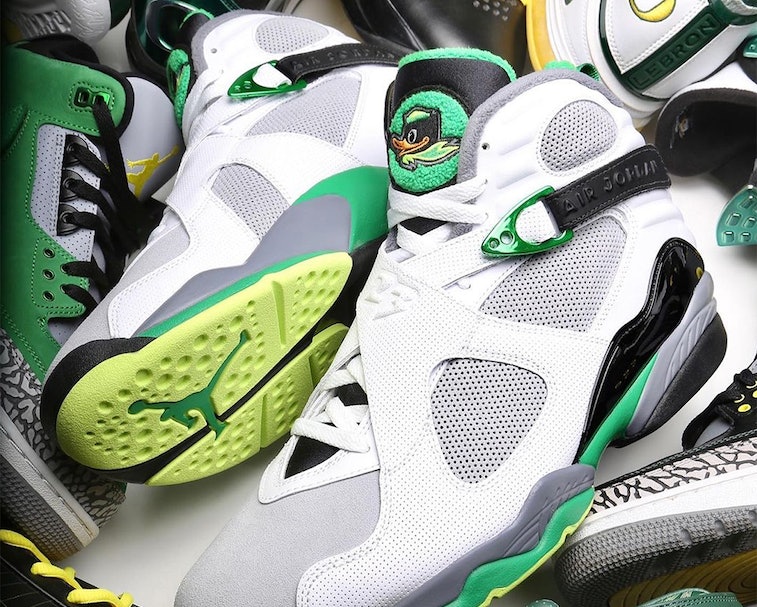 The University of Oregon’s close association with Nike has given its student athletes exclusive access to rare sneakers made only for the school. These kicks are often highly coveted by sneakerheads, but NCAA rules prohibit athletes from selling any items they’ve been given because of their association with their respective universities. But another avenue to getting Oregon athletes paid has emerged thanks to StockX and the agency Division Street.

100 pairs of the Air Jordan 8 Oregon Player Exclusive went up for auction on the resale platform, with proceeds going back to the university’s athletes. While StockX hosted the auction, Division Street is the conduit to paying players, as it will disperse the funds after being paid by StockX. Nike wasn’t officially involved with the auction, but it did sign off on 100 pairs being used for the express purpose of paying players.

“Division Street continues to demonstrate thinking outside the box for our Oregon athletes and partnering with innovative companies,” former Oregon point guard Sabrina Ionescu, whose also Division Street’s chief athlete ambassador, told Complex. “We loved the idea of dropping select pairs of the Oregon Jordans in an unexpected way that would benefit our athletes.”

A whole new era — As of this year, college athletes are now allowed to profit off of their likeness because of new rules from the NCAA. The change has brought a wave of first-of-its-kind endorsement deals, including college soccer player Reilyn Turner becoming Nike’s first NCAA endorser just this week.

Division Street, which counts Nike founder Phil Knight as one of several people involved, is an agency dedicated to helping University of Oregon athletes secure endorsements. After football players for the university were given pairs of the Air Jordan 8 Oregon PE, Division Street was able to get ahold of 100 more pairs to put up for auction to benefit the school’s athletes.

Bids for the sneakers, which were available in a range of sizes, reached as high as $7,000. None of the sneakers sold for less than $1,500, and now several hundred thousand dollars will go toward the U of O’s student athletes. And as tempting as it might be for players to sell their PE sneakers, now they won’t have to in order to secure a little extra income.