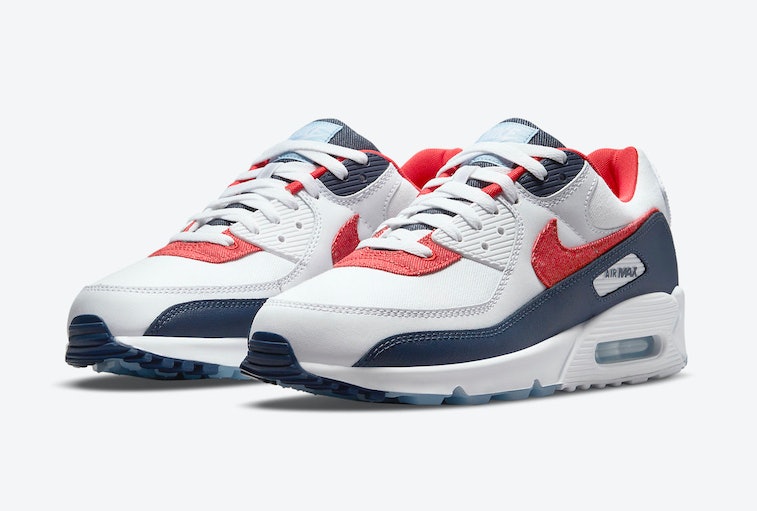 In the middle of its spring sneaker drops, Nike is already preparing for summer. The athletic brand debuted an Air Max 90 made up of red, white, and blue denim, inspired by the American flag and the country’s rich history of workwear. But despite March being Air Max month, it seems as though this pair is part of an upcoming patriotic-themed collection.

That being said, are consumers ready for an Americana capsule? Only a few months out of the Trump presidency, the stars and stripes are still shadowed by the “MAGA” message Trump supporters aligned with the flag — alongside other, more hateful ideas. Of course, not everyone dislikes the symbol from a design standpoint, and it’s possible to detach Trump from the flag. It’ll take more than a Nike collection, though, and we’re not sure if we’ll see the usual SNKRS rush for this theme.

Red, white, and just do it — As the first reveal of the larger capsule, this Air Max 90 is subtle enough for those worried about the alignment of the American flag. While upcoming designs might dedicate more of their composition to the patriotic symbol, the AM90 plays it cool with a white upper and hits of red and navy. No stars or stripes appear on the sneaker, as it focuses more on workwear textures despite its colorway.

Deviating slightly from its patriotic color, the shoe rounds out with an icy blue outsole and Air unit — frosty features to contrast the summer heat. Combined with the denim texture of the Swoosh and buttery navy leather of the mudguards, the baby blue details give the Air Max 90 a perfect look for Memorial Day and Fourth of July celebrations. Hopefully, vaccinations will have reached most Americans by then, and we can observe the holidays in style.

Land of the free (excluding sneakers) — Thanks to its unique fabrics, the silhouette will run you a bit more than average. Set to retail for $140, the Nike Air Max 90 “USA Denim” is slightly above the usual $120 AM90 price tag, but not enough to keep you — or other sneakerheads — from trying to cop. While Nike hasn’t announced an exact drop date, it’s suspected the themed sneakers will release in the coming months, as we head into warmer, more patriotic holidays. Because what’s more American than fighting for exclusive sneakers on an app?