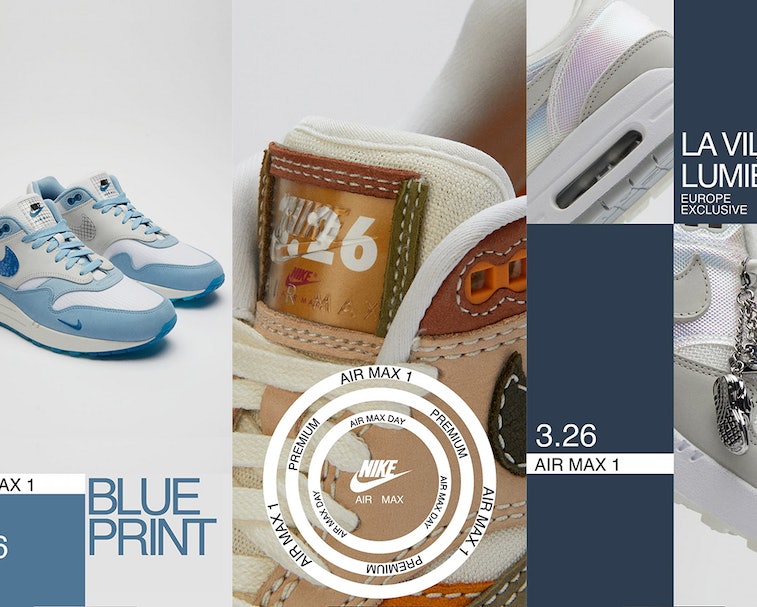 Air Max Day, the Nike corporate holiday that’s taken hold like no other, is just around the corner. This year’s celebration has special significance as the 35th anniversary of the Air Max 1, the sneaker that started it all, and the Swoosh is prepping three regional iterations for the occasion.

North America and Europe will each get an exclusive Air Max 1, while the third version is bound only for Latin America and Asia. We’re sad to say the best of them all, the earth-toned “Wabi-Sabi” makeup that’s already been teased, won’t be coming to the states as it’s been dedicated to the latter two regions.

“Wabi-Sabi” is a term applied to traditional Japanese aesthetics in which one should accept the presence of transience and imperfection. The sneaker paying homage to the concept comes with highlighted stitching, slight mismatching, and a faux-cracked midsole that are highly attractive in their supposed “flaws.” Lusting over it is a fraught affair if you’re living in the States, so we’ll move on to what the U.S. is getting.

The Blueprint — North America’s Air Max 1 comes with a “Blueprint” theme as a nod to Tinker Hatfield’s original designs for the sneaker. Tonal blues are combined with several shades of white and a series of grid patterns on the first sneaker to expose Nike’s revolutionary Air Max cushioning system.

Hatfield was originally hired as a corporate architect for Nike, making the “Blueprint” flourishes even more fitting, and he’d later be inspired by the Centre Georges Pompidou in Paris to make a sneaker with visible cushioning technology. 35 years later, visible Air bags are still a Nike signature, and Hatfield is now the most legendary sneaker design in the game.

Rounding out the Air Max day releases is the Europe- and women’s-exclusive “La Ville-Lumière,” which nods to Paris and translates to “City of Lights.” The Air Max 1 is the most muted of the three but comes with iridescent mesh adding faint color to the white, grey, and navy makeup. A “3.26” charm that comes with it calls out the annual date for Air Max Day, should it not already have been beaten into your head.

All three sneakers will release March 26 through the SNKRS app and select retailers in their respective regions. The resale market, of course, will allow you to go after one of the sneakers sold outside your country, and we fully expect the “Wabi-Sabi” Air Max 1 to inspire many sneakerheads to do just that.