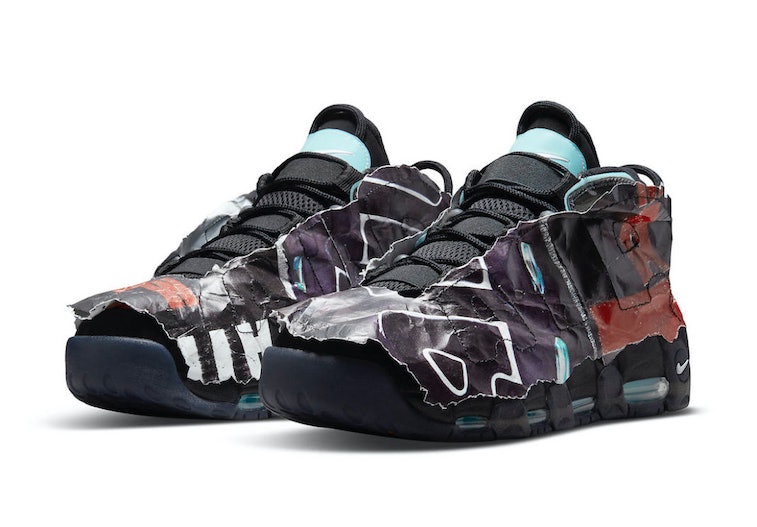 Nike’s latest shoe has been carefully kept under wraps — literally. The brand debuted a new Air More Uptempo “Maximum Volume” model, which sees the silhouette wrapped up in vintage Nike ads. The printed marketing can be kept on (so long as you don’t spill anything), or can be ripped off to reveal the sneaker’s signature spellout.

The Air More Uptempo comes shortly after Nike launched similar tearaway designs, including the brand’s highly coveted Carpet Company partnership. Also featuring an upper meant to be removed, the collaborative Dunk High boasts an underlying foam layer, which mimics insulation. The sneaker dropped just after Nike released another dubbed “Keep 'Em Fresh,” an Air Force 1 which came delicately wrapped in tissue paper inevitably ripped off by the wearer. Unlike these past tearaway silhouettes, though, we’re hoping Nike doesn’t run the Air More Uptempo into the ground, as it has with the Dunk and AF1 models.

Shucking sneakers — Keeping in tune with vintage trends, the newest iteration of the Air More Uptempo is wrapped in an ad for the sneakers that premiered just ahead of the 1996 Olympic Games in Atlanta. The graphics include a small photo of Scottie Pippen plus a new “Maximum Volume Nike Air” hit on the heel. Although the paper ad is actually stitched directly onto the shoe’s upper, it can be removed without damaging the layer underneath.

Below the vintage ads, the Air More Uptempo’s classic silhouette shines. Boasting a glossy black upper, the sneaker’s signature Air Max overlays are made up of an equally shiny black plastic surrounded by a baby blue trim. More bright accents come on the blue tongue, an accompanying embroidered red Swoosh, and a red jelly Swoosh on the heel. Icy blue Air Max cushioning can also be seen sandwiched between the shoe’s black midsoles, and underfoot, semi-translucent outsoles flaunt another large red Swoosh.

If you do opt for the unwrapped look of the sneaker — which is honestly the most practical way to wear it — you don’t have to save the paper ad you ripped off. Instead, reference the shoe’s insoles, which replicate the printed graphics of the ad.

Under cover for now — As of now, Nike hasn’t confirmed a release date for this retro-inspired sneaker. It’ll likely arrive on SNKRS come later in spring or summer, though, and consumers will have to hope copping a pair doesn’t come down to a draw. If you do score the Air More Uptempo “Maximum Volume,” though, know the W will be extra satisfying: Unwrapping the shoe will be like unwrapping a gift from yourself, to yourself.