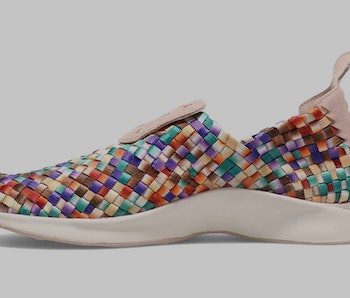 The Air Woven endures as one of Nike’s most fascinating sneakers of the millennium, and yet it stands out because it almost looks more ancient than it does contemporary.

Just like the name suggests, the sneaker’s upper is constructed with a basket-like weave of textile that’s typically been arranged in a potpourri of color. Without laces and with a small suede patch sitting where you’d usually find a tongue, the slip-on fits more like a sandal and is equipped with a seemingly straightforward midsole that packs Air cushioning inside.

Since first launching in 2000, the Air Woven has ebbed and flowed in Nike’s release calendar — disappearing for five years between 2012 and 2017 and then again fading away after 2018. Now, for the first time in three years, you’ll be able to get a brand new pair at retail, but it’ll take a little work.

A prime example of why you should use proxies — As part of a four-sneaker “Wanderland” pack, Atmos Japan has the exclusive on the first two Air Wovens we’ve seen in three years. One is as colorful as we’ve come to expect, while the other is far more muted with fragmented striping on a primarily black upper.

We’ll focus on the former, which is the encapsulation of what makes the Air Woven great and why you should utilize proxy services to purchase goods you’d otherwise only be able to get in Japan. An assortment of colors is made even more fetching with a gradient on each exposed square. You’ll find burnt orange, aqua blue, purple, and several shades of brown that suggest what footwear might have looked like thousands of years ago had people had access to advanced dye practices. Cream suede is used for the tongue patch, mustache, and outsole while an off-white midsole helps provide balance.

Many sizes of the Air Woven have sold out, but there’s a not-insignificant size run for both variants still left through Atmos’ website. Each will set you back ~$160 prior to the proxy fees you’ll have to pay to get the sneakers stateside. Chances are this is just the beginning of the Air Woven’s return, which means it could be easier to purchase later. But if you don’t want to wait to find out, smash the series of buttons it’ll take to make the Air Woven yours.