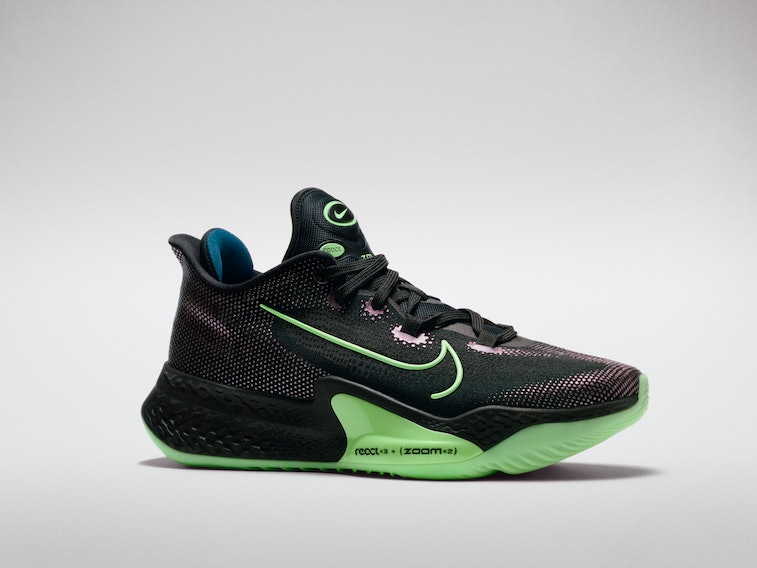 While Nike has no shortage of superstars on its roster, its best basketball shoe is now tied to exactly none of them. Today the company announces the Air Zoom BB, something of a cousin to the self-lacing Adapt BB and part of its Olympic lineup of products. It looks less like a basketball shoe than what you'll find in players' signature lines, meaning it can actually get some play off the court.

The formula — While boasting loads of court-ready tech, the Air Zoom BB appears much closer to the lifestyle and running spaces. The midsole combines Nike's React and Air Zoom technology for a cushiony feel that absorbs an athlete's energy and reduces fatigue. That could easily bog down the design, but the two Air Zoom units are tucked underneath the ball of the foot. The partially exposed React cushion gets most the glory, which has been earned by it becoming a hit on the Epic React Flyknit, as well as the React Element 55 and 87. Its wavy lines, frankly, look cool as shit.

And then there's the Swoosh, which is rendered minimally with two puffy cords reminiscent of the Cactus Plant Flea Market VaporMax. I love the design choice here, I love how after all these years, Nike still finds fun ways to play with its logo.

Putting the pieces together — Unlike most of the modern offerings, the Air Zoom BB is a basketball sneaker that can easily fit into an off-court wardrobe. I could see the black colorway pairing particularly well with a tactical cargo pant, as well as a simple pair of jeans or the right trousers.

Despite basketball essentially birthing sneakerhead culture, shoes actually intended to hoop in have all but lost relevance. For as big as LeBron James is, no one is getting fits off in his sneakers. Sales have been on the decline since 2015, and in 2019 basketball sneakers represented less than five percent of all athletic shoes sold.

Factor in Nike's shoes made from trash and 3D-printed soccer cleats, and it's an exciting day for footwear. If this is a sign of the future for Nike Basketball, I can't wait to see what else is in store. It may still be a long time before basketball sneakers fully return to the zeitgeist, but you don't need to wait for a reason to rock the Air Zoom BB.