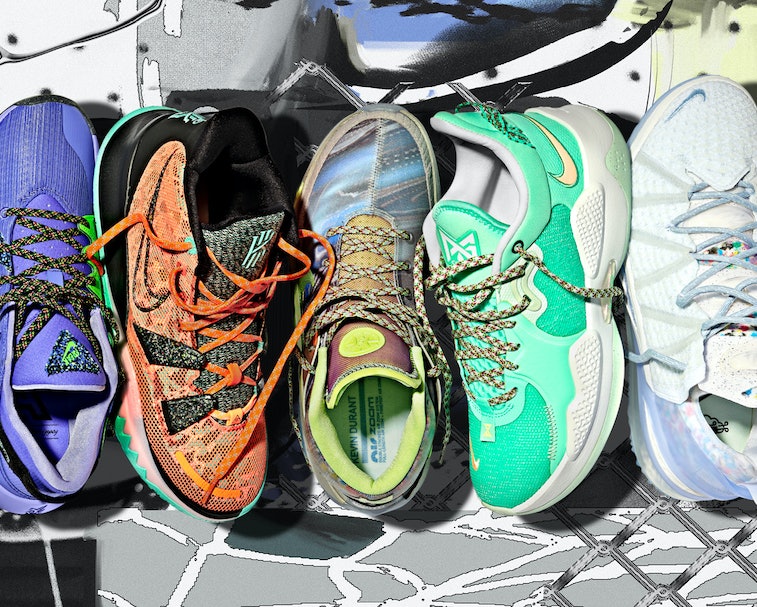 The NBA's All-Star Weekend will be condensed into a single day this Sunday, and Nike has revealed its full lineup of signature sneakers for the occasion.

The "Play for the Future" pack makes use of Nike's full roster of signature basketball players and takes inspiration from their support for a more sustainable future. Each of the LeBron 18, KD 13, Kyrie 7, PG 5, and Zoom Freak 2 will get a color scheme channeling a specific element of environmentalism — but, curiously, nothing about the construction or materials is sustainable.

I guess putting out support for more clean practices is worthwhile on its own, but it's surprising that Nike hasn't utilized any of its developments in more sustainable sneakers. The brand's basketball department just put out the Cosmic Unity, which is made of "at least" 25-percent recycled materials by weight and is constructed without the use of any binding materials.

LeBron James' take on playing for the future uses a mix of white, blue, and semi-translucent materials inspired by the "clean, unpolluted air athletes need to breathe when they ball." Underneath the icy blue heel panel is a sort-of confetti pattern that matches patches on the tongue and is a through-line for many of the "Play for the Future" kicks.

Kevin Durant opts to take on clean, renewable energy — which Nike ties to him by saying: "The energy that drives Kevin Durant is neither created nor destroyed. It moves through him like lightning and transforms into his precise kinetic strikes on the court." That sure sounds nice, and electric green accents including the Swoosh help make his shoe pop.

Kyrie Irving, the league's leading conspiracy theorist and metaphysicist, supposedly uses his signature shoe to champion his plant-based diet. Nike says there are plant-inspired graphics throughout the upper, but all I see is a cheetah print pulled from a noted carnivore. But hey, there are sprouts growing out of the heel's "KI" logo that don't require, like, transcendental meditation or some wonky third-eye goggles to find.

Fun fact: Paul George is an avid fisherman. This I did not know, and it inspires his understanding of the importance of clean water. A "cool, watery green" is the dominant color on his sneaker, and ripples appear across the upper's medial and lateral sides. The PG 5 is probably the best-looking shoe of the pack — which is good news because it's also one of the cheapest at just $120.

Giannis Antetokounmpo, AKA the Greek Freak, looks back on having to share a single pair of basketball shoes with his brothers when he was a kid. He's never forgotten that less is often more because of the experience, and this somehow informs the blue and green color scheme for his second signature sneaker.

Each shoe from the "Play for the Future Pack" — save for the Zoom Freak 2 — will hit stores and Nike's website on March 7. While Antetokounmpo's sneaker launches online on the same date, it won't hit physical locations until March 12.