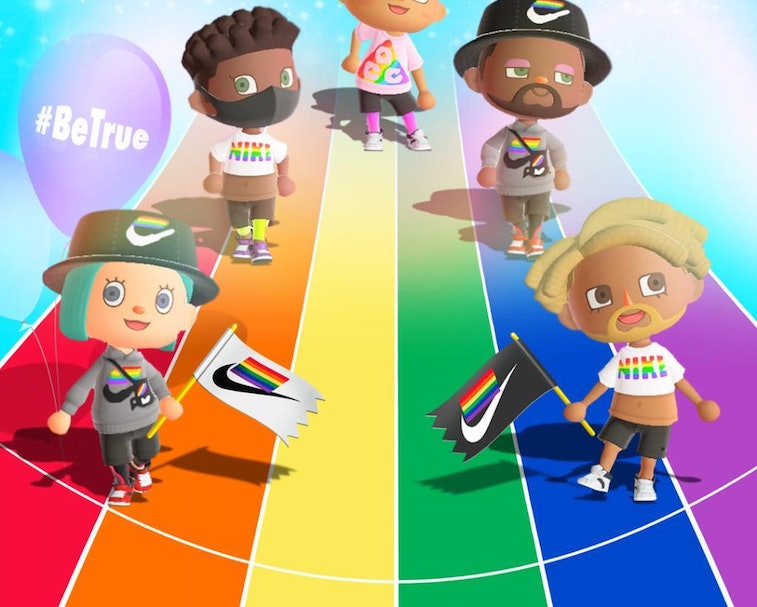 While COVID-19 has led to the cancellation of Pride parades, Animal Crossing: New Horizons has emerged as another avenue for celebration. The game will play host to a gathering on Pride Island, which opens this Thursday and will culminate in a digital festival June 27 as part of the Global Pride event. Designed by the marketing agency We Are Social, the island will feature a rainbow march, message board, hall of fame, club, and a catwalk. And of course, there will be clothing too.

While not an official part of the event, Nike has contributed to Animal Crossing Pride displays by releasing its BeTrue collection within the game. This marks the biggest such release in Animal Crossing, which quickly emerged as an outlet for brands and fashion enthusiasts alike to express themselves during the pandemic. Smaller brands like 100 Thieves paved the way, but Nike joining in shows just how big of a force Animal Crossing has become in fashion.

"It was an absolute dream come true to work with Nike on this," Downham said in an Instagram post. I'm SO lucky and SO happy to get to contribute something that means SO much to me and my friends."

Wear the gear to Pride Island — Nike's collection is just one of a myriad of Pride-themed options, many of which have been shared by the Global Pride Crossing Twitter account. The island has yet to open to the general public, but several streamers have had the chance to preview it.

Global Pride will livestream the Pride Island's festivities as part of its 24-hour event on June 27. The wide-ranging digital event will raise money to aid Pride organizations financially impacted by COVID-19, as well as other LGBTQI+ initiatives.

"Pride is an important event for many – often, it gives hope, as well as a sense of community and belonging," Arnaud Robin, innovations director at We Are Social Singapore, told Forbes. There was a thriving LGBTQI+ community on Animal Crossing already, so it was the perfect opportunity for this to happen.

AC also hosted a runway show — In May, the photographer Kara Chung and 032C fashion director Marc Goehring threw a runway show in Animal Crossing featuring designs inspired by the likes of Louis Vuitton, Loewe, Balenciaga, and more. Together with player-organized drag shows, it shows how the game has been adopted and bolstered by the fashion and queer communities.