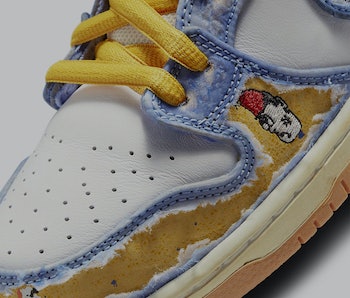 There’s no question that Nike’s most covetable silhouette at the moment is its Dunk, which has sold out in minutes at every drop — and now, it seems the Swoosh is picking up collaborators to help it come up with new designs. Baltimore-based skate brand Carpet Company has teamed up with Nike SB to release a collaborative Dunk High Premium, featuring playful graphics, a worn sole, and an upper meant to be ripped apart.

Carpet Company’s Dunk is the latest in Nike’s lineup of DIY-esque sneakers. The brand recently dropped an iteration of its signature Air Force 1, appropriately titled the “Reveal,” which boasts a thin white fabric meant to be torn away to reveal bold colors and textures hidden beneath. Nike then released another AF1 pair dubbed “Keep 'Em Fresh,” which comes delicately wrapped in tissue paper inevitably ripped off by the wearer. After all, there’s nothing more blasé than destroying a coveted pair of sneakers — and despite the demand for the Dunk silhouette, consumers seem to be on board with demolishing this limited collaborative pair.

Dismantled details — Founded in 2015 by brothers Ayman and Osama Abdeldayem, Carpet Company is a relative newcomer to the industry, but is already making big waves with its SB Dunk High collab. With a crisp white leather base and swirling blue mesh fabric uppers, the shoe looks fresh. Carpet Company’s signature star motif, embroidered with silver thread into the lateral by the heel, adds branding without being obnoxious.

But a yellowed midsole and aged gum outsole suggest a different look for the sneaker. Upon ripping away the beautifully printed blue upper, an underlying yellow panel can be found, mimicking the texture of foam insulation. Outlined by the remaining blue fabric, the Swoosh can also be ripped away to reveal a plain black one. Carpet Company’s star logo remains visible while a new brand motif, hidden below the blue overlay, now appears on the lateral.

Of course, each consumer can choose how to customize their Carpet Company Dunk, making it truly a shoe for everyone. Whether you choose to keep your sneaker wrapped or totally demolish its upper, the footwear still boasts an array of irremovable features. More Carpet Company branding is hidden inside the tongue in Arabic, while graphic insoles bring even more heat. One last Carpet Company logo can also be found on the outsole.

Don’t be sus — A public release of the shoe is slated for February 26 on Nike’s website, but in the meantime, Carpet Company has lined up an online raffle for its collaborative kicks. Every $20 purchase on Carpet Company’s website will automatically grant shoppers one raffle entry, and winners will be notified later this week. They’ll receive their sneakers in an exclusive friends-and-family box, which replicates the look of a metal oil canister.

As raffles have been a touchy subject in the sneaker world since Trophy Room's disastrous raffle for its "Freeze Out" Air Jordan 1, Carpet Company announced that it would cancel any orders it found suspicious — but how it’ll determine that is unclear. Best of luck and don’t look sus.