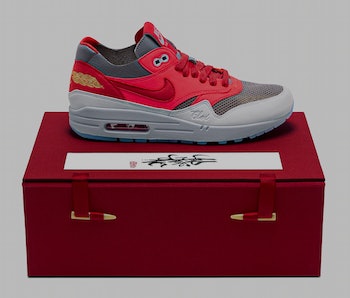 A holy grail for the most studious of sneakerheads is CLOT’s “Touch the Sky” Nike Air Max 1. Rumor has it only four pairs of the sneaker were made for Kanye West’s 2016 tour date in Hong Kong, two of which were given to West himself. The other two went to CLOT founder Edison Chen, who opened for West during the concert as a rapper.

A workaround was found when enterprising sneakerheads discovered that they could recreate the color scheme on Nike’s customization platform, then known as Nike ID. Realizing what was up, Nike eventually blocked users from making their own copycats — which is why even the few “fake” ID versions made sold for exorbitant prices on the nascent resale market.

Some 15 years later, CLOT is finally making the sneaker public. Known now as the “K.O.D. Solar Red,” the Air Max 1 is nearly identical to the super rare sneaker made for West before he had Yeezys. The pink, red, and grey color scheme returns with a new translucent blue outsole and slightly different branding on the heel. It may not be the exact shoe given to Kanye — but it’s the closest thing we’ll ever get.

The stamp is the key — The easiest way to distinguish the authentic “Touch the Sky” Air Max 1 from the Nike ID versions is through the cursive “CLOT” stamped into the original’s mudguard. That defining motif returns on the new “K.O.D. Solar Red” AM1, which completes a trilogy of Clot releases based on unreleased sneakers from the brand’s past.

CLOT’s logo now shifts from the lateral side of the sneaker to the heel, where it’s embroidered in gold with a feather-like motif surrounding it. Similar to the other “K.O.D.” sneakers released this year, a reflexology chart is printed on the insole, while an anatomical foot can be seen underneath the translucent blue outsole. The first two kicks signified the standard progression of undergoing reflexology and then having tea — so what comes next is... Kanye West?

No one will be complaining about the lack of thematic cohesion, as a long lusted over sneaker will finally see a wide release. Clot’s Juice Los Angeles store will be the first place to get the West-inspired Air Max 1 on July 17, followed by a July 20 release at other Juice stores, online, and special pop-ups that have yet to be announced.

Now we just wonder — will Kanye himself get a pair? He has been flirting an awful lot with Nike lately, despite his allegiances to Adidas.