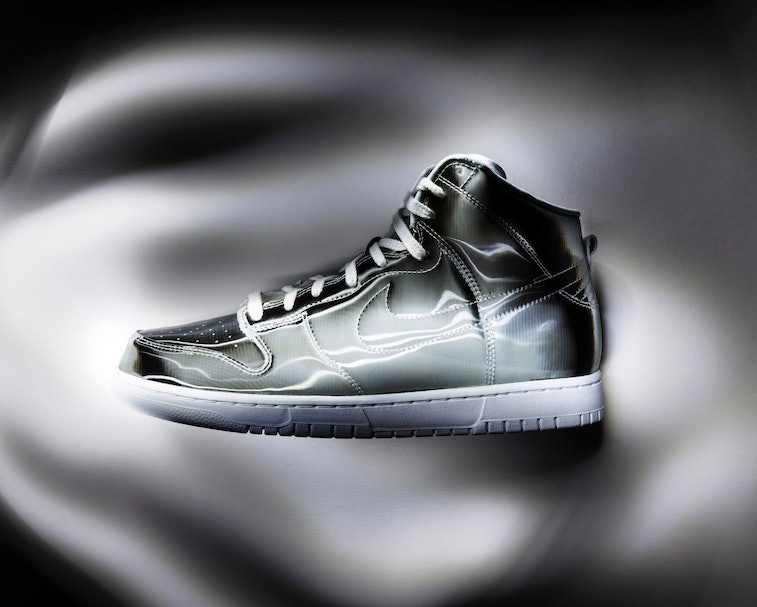 CLOT and Nike have teamed up to create a Dunk straight out of the future — more specifically, one that looks like Spongebob’s envisioning of the year 4017.

The Dunk High “Flux” has a chromed out appearance, but one achieved through optical illusion instead of mere metallic materials. A lenticular design makes the sneaker look as if it’s smooth and reflective, with a fluid sheen that changes at every angle. Even the tongue patch makes use of deception, as either the CLOT or Nike logo can be seen depending on how you look at it.

“I have always had this fascination with lenticular since I was a child,” CLOT said in a blog post for the sneaker. “When we started approaching the design, I thought about a shoe that would change and would catch your eye even if you’re standing across the street. The shoe, at every angle you move, gives you a different feel. The simplicity of the colorway and the subtleness give a very contemporary view of what a shoe might look like in the future.”

The Silver Surfer — The idea behind CLOT’s brilliant Dunk, besides giving it a lustered appearance, was to invoke the philosophy of Yin and Yang by creating fluidity and harmony. The concept can also be seen more literally with black and white visible at the end of the sneaker’s spectrum, even though its primary appearance is that of silver or chrome.

A lenticular fabric is used throughout the Dunk’s entire upper, and topstitching gives the Swoosh its shape instead of a separate swatch in order to keep the appearance smooth. CLOT is calling the sneaker its most innovative shoe yet — a label that might even apply to Nike as a whole — while Chen said in an Instagram post, “The process of making the shoe was probably the hardest that I’ve ever encountered before.”

Images alone don’t quite do the Flux Dunk justice, and even videos of the sneaker leave a wanting to see it in person. To do so and even own the kicks, look out for it to release March 18 through Juice Store's worldwide locations and website. Raffle details are still to come, and you’re going to want to throw your hat in the ring to put the shoes on your feet.