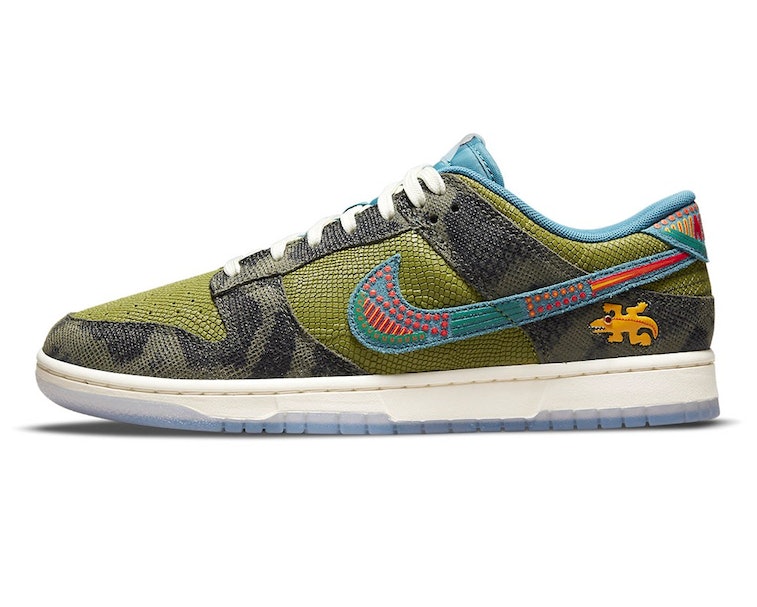 Nike’s “Día de Muertos” sneaker lineup has grown from two to three, as the Dunk Low joins in on the celebration with the Air Force 1 Low and Air Jordan 1. And just like the other two sneakers, the new Dunk borrows heavily from Aztec culture.

Adorning the sneaker’s foxing is a lizard pulled from Mictlán, the underworld in Aztec mythology. Xochilonal is one of many creatures the dead must navigate past in their four-year journey through the nine levels of Mictlán, and the lizard lives an a lake of black water known as Apanuiayo. To further invoke the theme, a scaley leather is used in solid green and a darker series of stripes throughout the upper.

The Swoosh, meanwhile, is decorated in an embroidered pattern native to Mexico with a mustache to match. Mismatched “Siempre Familia” and calavera graphics are printed on the sockliners, completing a sneaker as fit for La Raza as they come.

Get a pair just in time for Día de Muertos — Día de Muertos begins November 1, and the celebratory Dunk is slated to release with just a few days to spare on October 29. That isd provide, of course, that it isn’t subject to a delay like several other recent Nike releases, including the the “Gundum” Dunk High originally slated for earlier in October.

While Nike has been celebrating the holiday for years, this year’s “Día de Muertos” stands out from others in its focus on Aztec culture specifically. The theme continues with a small run of apparel, highlighted by a creature-covered bomber jacket, scheduled to release the same day along with the Air Force 1 through the SNKRS app. And as cool as the products are, what’s really dope is the opportunity for sneakerheads and streetwear devotees to learn more about Aztec culture and the diversity of traditions within Mexico.