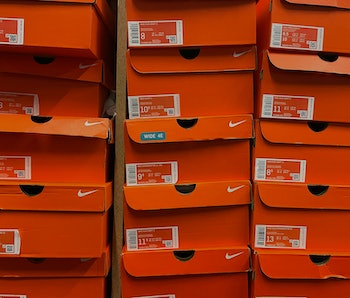 Nike is cementing its direct-to-consumer strategy by cutting ties with DSW, one of the largest shoe store chains in America. As of 2022, customers will not be able to buy Nike apparel or sneakers at the retail location — or a number of others — as Nike continues to cut down the number of third-party merchants it sells through. In addition to DSW, stores like Zappos, Dillard’s, Urban Outfitters, and Shoe Show will no longer carry Nike products in the new year.

The business move — which has been reflected by Adidas, Under Armour, and Crocs — comes as brands try to maintain more control over their images, distribution, and pricing. Selling only through their own retailers also allows companies to maximize profits and exclusivity, a factor becoming increasingly important as the Omicron variant of COVID threatens shortages and sales once again.

No more middle man — Matthew Friend, Nike’s finance chief, said in a statement that the brand has “exited about 50 percent" of its retail partners since announcing its departure strategy in 2017. At that time, the company said it would focus its resources, marketing and top products on just 40 retail partners, including Foot Locker and Dick's Sporting Goods.

For bigger stores like DSW, the lack of Nike products won’t hurt income. Bill Jordan, president of DSW parent company Designer Brands Inc, told Footwear News that sales of Nike products accounted for less than 4 percent of DSW’s revenue in 2019, and that he doesn’t expect to see a severe impact in sales next year. “The good news for us is that the hole that needs to be filled is not such a big hole that we can’t do it,” Jordan added, noting significant sales from other athletic brands like New Balance, Skechers, and Brooks.

Yet for independent sneaker and athletic shops — which rely heavily on selling Nike — the brand’s decision may be terminal, especially as other athletic companies restrict their retailers. Unless smaller stores are able to replace Nike sales with others, they’ll be forced to close.

Better for Nike — Limiting products to a narrowed list of stores (including its own) helps Nike make more than double the profit it would get from selling through wholesale partners, reports CNN. The brand will have more control over pricing and its shoppers’ experience, allowing it to present products in enticing ways and prevent goods from being discounted too heavily. In the sneaker industry especially, exclusivity (including a hefty price tag) is essential to a model’s success.