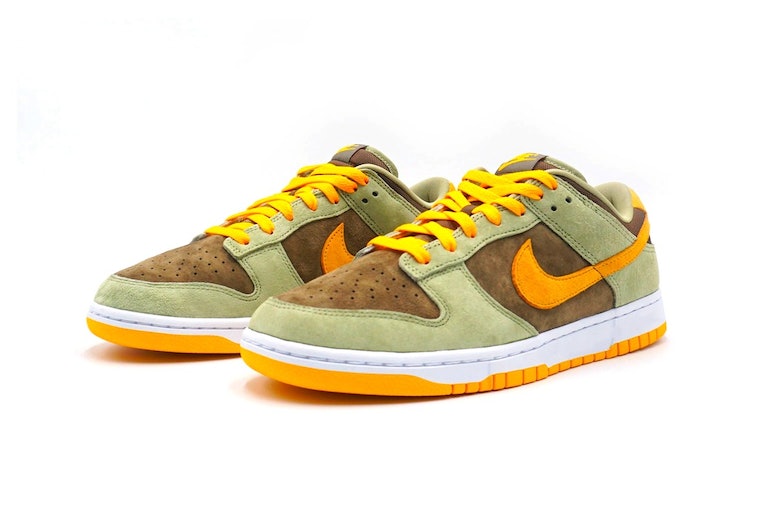 Nike has played into the vintage hype by re-releasing some of our favorite designs from the 2000s, as well as taking inspiration from retro pairs. The brand’s latest release seems to be inspired by the 2001 trio of “Ugly Duckling” Dunk Lows made up of “Plum,” “Ceramic” and “Veneer” styles. Taking on a similar muted color scheme and suede upper, Nike’s upcoming Dunk Low comes dressed in olive, gold and brown hues.

There’s no question this Dunk will be just as coveted as its “ugly” predecessors. The 2001 trio was originally released exclusively in Japan, and when Nike reissued the pack for a U.S. launch in 2020, collectors and enthusiasts alike went wild. Pairs from the re-release sell for up to $950 on resale sites, while Nike’s upcoming Dunk Low is already listed for up to $600 prior to its launch. With so many consumers after the design, Nike will most likely subject the silhouette to a lottery-based draw — only making it that much harder to obtain.

New shades in suede — Taking on the same construction as the “Ugly Duckling” pack, the forthcoming Dunk Low boasts a soft suede upper. Muted brown underlays allow details to stand out more, while a military-esque olive shade dresses the overlays. Adding a bit more texture to the shoe, nylon covers the tongue and collar, taking on a matching brown and light green color scheme.

Standing out from the muted upper, a bright tangerine hue accents the shoe’s laces, “NIKE” heel branding, and outsole. A toned down version of the color hits the sneaker’s Swooshes. Wrapping up the Dunk Low — and its similarities to the “Ugly Duckling” collection — the midsole sports a clean white look to allow its upper and vibrant outsole to shine that much more.

Their drop might actually get “ugly” — While Nike continues to roll out new Dunk designs at a tireless rate, most of them stick to a classic leather two-tone makeup, making this upcoming sneaker that much more special and thus covetable. But between serious demand, a presumable draw, and limited stock, it’ll be hard to obtain — especially as for now, the Dunk Low is only scheduled for a European release on May 21.

International shipping — or a hefty price tag on StockX — won’t limit those that really want the upcoming sneaker. With plenty of people eyeing the design, though, Nike would be making a mistake by not bringing its olive and brown Dunk Low stateside.