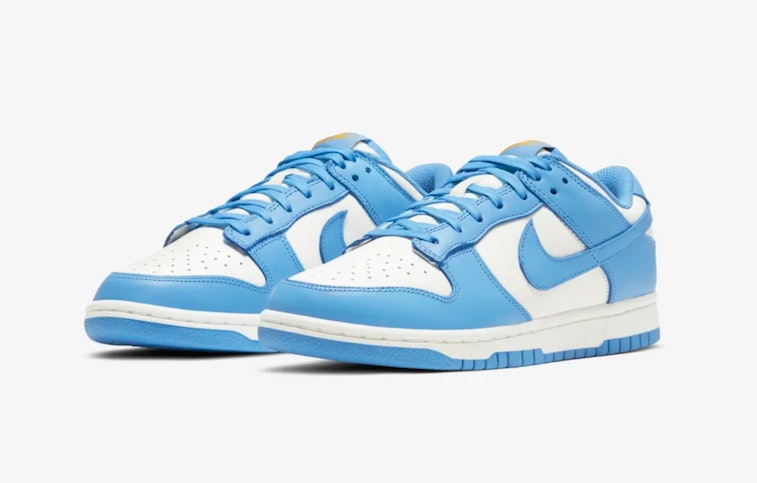 As many Ls as Nike SNKRS has given us, we’ll always come back for more (willingly or not is another conversation). Hundreds, if not thousands, of sneakerheads are anticipating Nike’s Spring 2021 range of Dunk Lows, which are finally hitting retail this week after a slight delay. With three pairs slated to release February 18 at 10 a.m. E.T., we’re hoping this drop goes smoother than past launches.

The brand’s retro Dunk silhouette has accumulated popularity at an astonishing rate. Since last year, it’s become near impossible to score a pair without paying top-dollar for resale. Nike has tried its best to satiate consumers, adding the Dunk Low to its Nike By You customization program, but failed miserably. Meanwhile, rumors of exclusive shades and more collections have surrounded the brand, but nothing’s been confirmed yet. As of now, this spring Dunk drop is the closest — and cheapest — method of attaining the coveted silhouette.

Drunk on Dunks — Each of Nike’s Dunk Low sneakers features traditional color-blocking and two-toned leather uppers. A “Medium Gray” Dunk, available in men’s sizing, boasts a light gray base and varsity red overlays. It bears a striking resemblance to the legendary "UNLV" sneaker from the '80s, which was later reimagined by Virgil Abloh for an Off-White x Nike collaboration in December 2019. Now’s your chance to score the nostalgic shade.

Another highly anticipated Dunk Low arrives in “Hyper Cobalt,” which will also drop in men’s sizing. Dressed in a black base with vibrant blue overlays, this sneaker deviates from the other light-toned offerings while managing to stand out in its own way. Like its fellow Dunk Lows, however, this shoe comes with a white midsole to allow its bold outsole to shine.

Nike’s third and final Dunk Low of its spring collection launches in women’s sizing, though we doubt the masses will leave the shoe to the ladies. The “Coast” Dunk sports a white base and light blue upper reminiscent of UNC’s more prolific “University Blue” shading. Definitely the brightest of the three Dunks, the “Coast” sneaker also features hits of yellow on its insoles, tongue branding, and heel tab.

Try (your best) to buy — All three shades of the Dunk Low will be available via Nike SNKRS come February 18 at 10 a.m. E.T. With each model priced at $100, this is the cheapest you’ll be able to find the silhouette — knowing it's authentic, at least. Of course, you’ll have to fight through bots, other sneakerheads, and general Nike madness in order to score, but that’s a price I think we’re all willing to pay.

If SNKRS crashes or conceivably fumbles its Dunk drop, you can try again on February 25, when the high top version of the silhouette will debut in “Vast Gray” and “Football Gray.” You could always resell the sneakers for the ones you wanted in the first place, but you won’t get the same satisfaction of the infamous “Got 'em.”