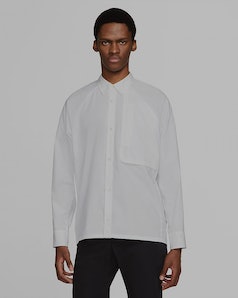 Nike is getting into high-end lifestyle apparel with its “Every Stitch Considered” line, which first launched last fall. A second collection has dropped for spring, bringing another crop of proper shirting, trousers, and outerwear that’s a far cry from Nike’s typical athletic offerings. Still, the minimalist everyday apparel is informed by the scientific research Nike has undertaken for its more active attire, allowing for a natural range of motion and high level of function.

In the new collection, you’ll find a lot of pieces that look like they could have come from COS, H&M’s higher quality brand that’s still relatively affordable. The prices, however, will ward off any confusion. A crisp white button-down with an oversized breast pocket shirt is selling for $480, while a two-in-one cold weather jacket yet to release runs $2,500.

There’s no doubt that Nike’s Every Stitch Considered line has good stuff — but it’ll be up to you to decide if its scientific roots are enough for you to choose it over a more established luxury brand.

Hardly a Swoosh in sight — Graphics are few and far between in Every Stitch Considered, with craftsmanship and functional elements taking the front seat. The only place you’ll see the Swoosh prominently is on a single $120 T-shirt, available in black or white, cut in a relaxed fit.

Men’s and women’s apparel are both available, and it’s the latter that swings more exciting. A lightweight woven jacket ($600) and wide-leg tailored “Sneaker Pants” ($390) both drape excellently, while a midweight jacket with a storm collar in brown makes the collection’s best case for minimalism. An asymmetrical insulated vest ($600) gives off some serious Acronym vibes — and, fortunately, it’d probably be the easiest women’s piece for men to adopt.

Nearly identical for both men and women are ribbed sweaters, cardigans, hoodies, and jogger pants.

What’s disappointing is that Nike says little about the materials used throughout the collection. If you’re going to drop this much dough on a piece, you want to know more about what warrants the price. Noah goes exceedingly for transparency in this regard, and that’s a large part of why people have no problem shelling out for high prices. Nike doesn’t need to make a full page dedicated to every fabric it’s used, but a little more info would go a long way.

Most of it is out now — Some pieces still have the nebulous “coming soon” tag, but most of the Every Stitch Considered collection is available now on Nike’s website. The white button-up is already sold out in all but XL, and it’s not unlikely that other items follow the same fate.

That being said, many pieces from last fall’s drop are now on sale — so it may be worth waiting out if you’re skeptical on Nike’s entry into luxury apparel outside the field of play.