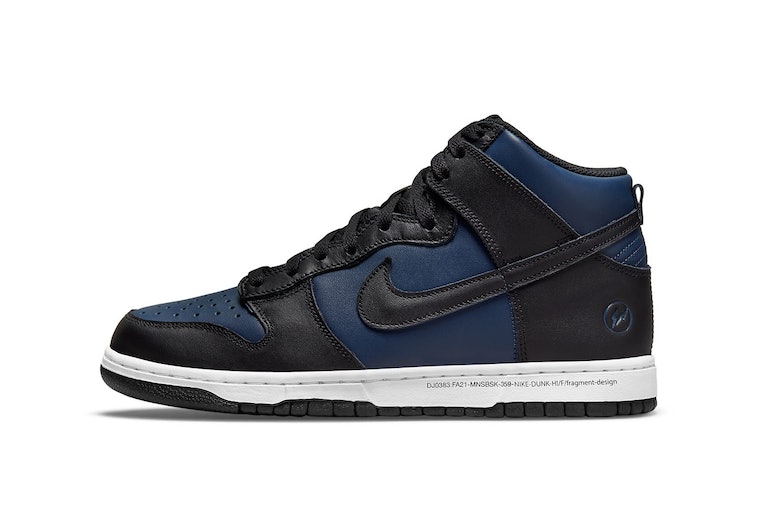 Unlike the previous Dunk, which was a reissue from the “City Pack” in 2010, the “Tokyo” variant features a brand new dark blue and black upper with the lightning bolt logo that’s become more and more of a common sight. One could easily say Fragment is phoning it at this point, especially after the unimaginative Travis Scott Air Jordans that recently dropped, and this latest release may show that excitement for the early pioneer of streetwear is dying down.

With the exception of the Scott releases, which are as sure-fire of a bet for “hype” as you can get today, demand for Fragment sneakers is trending downwards. The brand’s Air Jordan 1 from 2014 commands upwards of $4,000 on the resale market, but the “Beijing” Dunk from earlier this year can be had for barely more than $200. Prices on the secondary market aren’t the only measure of a show being worthwhile, but the repetition of Fragment’s collabs does little to inspire either.

A possible Japan exclusive — What may end up being most enticing about Fragment’s latest Dunk is that it’s looking like it’ll be exclusive to Japan. A release has been confirmed for the Nike SNKRS Japan app this Saturday, September 5, but information on a wider release has yet to be announced.

Just like the “Beijing” Dunk, the “Tokyo” variant features Fragment’s lightning logo debossed on the foxing and printed on the insole, while production details appear on the white midsole. Fragment frequently uses blue for its collaborations, but the shade here is darker than anything the brand has used prior.

In a vacuum, the “Tokyo” Dunk is indeed an attractive sneaker — we’d just like to see something other than a formula that’s become rote. Fujiwara has been an essential figure in the exchange of Japanese and American footwear and streetwear, but his output has begun to feel like less an event with each new drop.