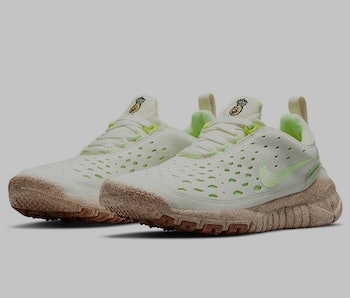 It's been nearly eight years since Nike has released a "Free Run Trail," although the core tech from the barefoot-like running shoes is still present in different styles to this day. The early, more rugged shoe first released in 2006, just two years after Nike kicked off the Free Run series inspired by Stanford athletes who would run barefoot on the school's golf course.

Tobie Hatfield, brother of the legendary designer Tinker, and Eric Avar spent years studying how to mimic a more "natural" stride for Nike. The result was a sole with minimal offset from heel to toe and made out of a super flexible Phylon material. As more models released, a number system indicated the amount of cushion in each shoe, with 3.0 having the least and 7.0 at the top end.

Nike retired its use of numerals in Free sneakers in 2016 before bringing it back three years later for the Free RN 2.0. Now, we're set for a blast further into the past with the return of the original Free Run Trail.

Welcome the "Happy Pineapple" — The now retro shoe will make its first return in a "Happy Pineapple" makeup with a cute lil' embroidered mascot on the tongue. To continue the theme, a base layer of washed-out neon green sits underneath a suede shell in an off-white color Nike is referring to as "Coconut Milk." At the base is a speckled brown midsole, with a darker shade forming the outsole.

Inside is a cork insole further embodying the fruit theme and stamped with the "Move to Zero" logo used to signify Nike's more sustainable product offerings. Cork is well known as a more sustainable choice for sneaker insoles — and because the Free Run Trail has just resurfaced, further sustainable materials could be involved as well.

Now we wait — For now, all we have are the photos that have surfaced and a loose timeline for a release in the coming months. The "Happy Pineapple," and any other variants that are all but inevitable, are worth getting excited over because of how pioneering the early Free Run sneakers were. Lightweight running shoes have become the norm today, but it's worth remembering how remarkable the Free Run kicks were in the early days.

They've also aged spectacularly well from a visual standpoint and should do well in a more lifestyle-oriented second life as Nike's technology has advanced much further.