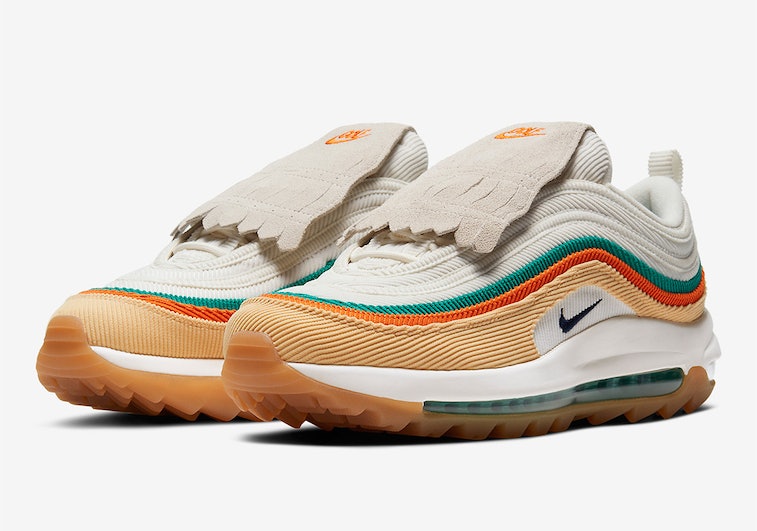 After beginning to dole out golf-equipped Air Jordans on a more regular basis, Nike is taking its experimentation with the sport to the next level.

Nike Golf is slated to release an Air Max 97 and Air Zoom Victory Tour, both of which have been updated with fringe tassels known as "kilties." The orange, green, and cream color scheme outfitting the two sneakers make them even harder to look away from — but it looks to be the kilties that will divide golfers.

Golf WRX first revealed the upcoming Nike releases and posed the following question to its followers: "Would you wear a shoe with fringe in the year 2020?" The answer was a resounding "no," but I can't help but think they're rejecting a fun shoe that brings back an old golf staple.

Hear me out — What really does it for me, particularly on the Air Max 97, is the decision to render the upper in corduroy. Together with the suede kilties, the fabric choice makes for a soft palette emphasized even further by the Miami Dolphins-esque color treatment. If the outsoles, which come in an always appreciated gum on the AM97, weren't so specifically tailored for the golf course, I would love to rock these kicks on the street.

Making the kilties even more fun is the embroidery tucked away underneath. A wish of "Good Luck" is made visible only to the wearer when they peel back the kilties to tie their laces. This message also appears across the two outsoles of the Air Zoom Victory Tour, and it's these sorts of details that bring sneakers to the next level.

A Nike Golf logo also appears atop the kilties, and on the insole is a golf ball graphic decorated by the Swoosh. There's just so much to love here, so why not take the risk of wearing an embellishment whose hay-day predates your birth?

Stay tuned for a release — The Masters is slated to begin this Thursday, November 12, and I'd be willing to place a small wager on Brooks Koepka rocking the Air Max 97s while playing. He's already worn cleated Off-White Air Max 90s on the course and responded to a question about his footwear by saying: "The Off-Whites? It's fashion, bro."

When pressed further, Koepka eviscerated the stuffy old guard of the sport. "I don't know how to explain it," he said. "It's Off-White. It's fashion. I guarantee the whole golf world has no clue what Off-White is, but it's fresh. If you're a sneakerhead, you'll get it — or into fashion. Sneakerheads know, yeah."

Perhaps we should take it as a good sign that the golf world isn't loving Nike's new kicks. Over on the sneakerhead side, they look pretty damn good to me.