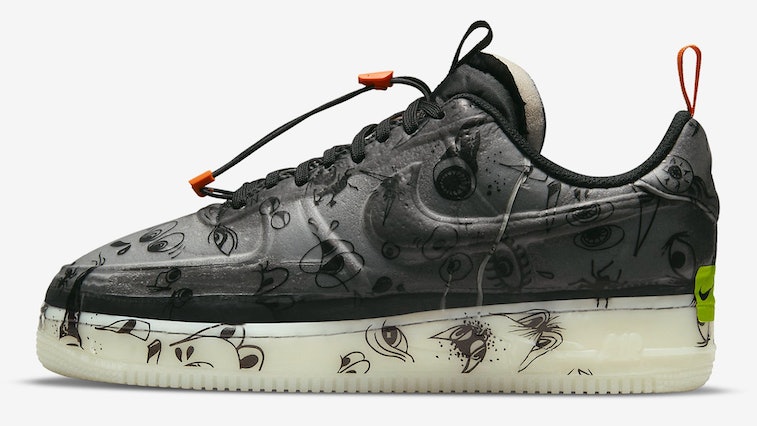 Nike offers some of the best seasonal sneakers out there and finally, just a few days into October, we’ve gotten our first look at the brand’s Halloween offerings. Following Nike’s yearly X-ray Air Force 1 design are four other thematic kicks, including some of the brand’s most popular models.

The upcoming pack features a Dunk Low, Air Force 1 Experimental, Air Presto, and another Air Force 1 unified by a timely color palette of black and orange. Much like the previous skeleton Air Force 1, all of the Halloween sneakers boast glow-in-the-dark details — although their focus on color and subtle details, rather than an all-out theme makes them slightly more wearable year-round.

Per the Air Force 1 Experimental’s name, its design features a black foam upper and glow-in-the-dark sole unit wrapped up in a translucent sheath. All types of ghoulish eye drawings cover the shoe as minimal hits of orange appear at the heel tab and lace pull tabs.

Perhaps the most coveted of the pack — thanks to insatiable demand for the model — the Dunk Low flaunts a timeless design. Its off-white base is accented by black leather overlays, thematically decorated with subtle eye graphics, and its translucent outsole glows in the dark. An orange Swoosh finishes off the sneaker, suggestive of the October holiday, but suitable for year-round wear.

Trick-or-treat — Nike has yet to reveal when its Halloween sneakers will be made available — but seeing as we’re already in October, a drop should be expected soon. The four eye-catching models will likely see a release on SNKRS, where users will have to enter a draw to buy the shoes: Let’s hope shoppers are served more treats than tricks this Halloween season.