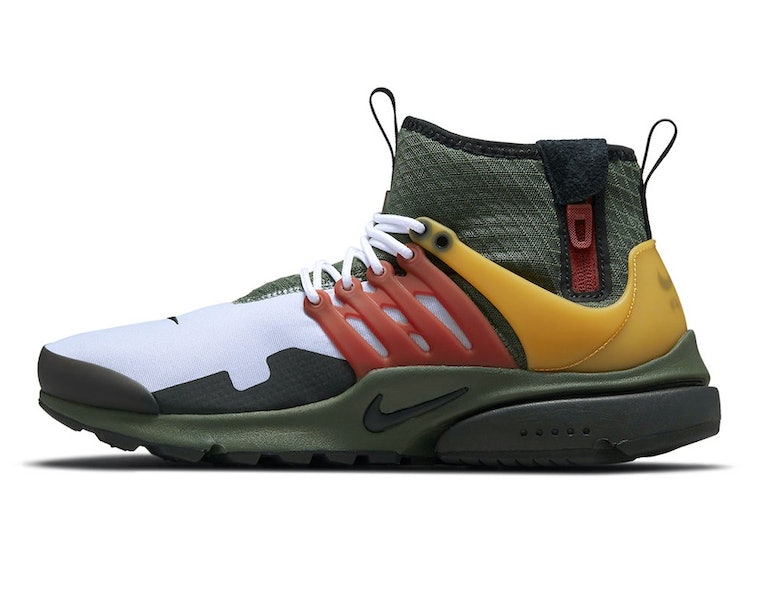 Adidas may have the exclusive license on Star Wars sneakers, but that isn’t stopping Nike from taking unofficial inspiration from some of its most iconic characters.

Images have surfaced of an upcoming Air Presto Mid Utility pack that takes its cues from a pair of Stars Wars villains. Boba Fett and and Darth Vader’s costumes are both invoked, although it’s the former that stands out most. The bounty hunter’s green, red, and gold armor undeniably informs one of the pairs, while another black version with scarce red and blue accents has more plausible deniability in its ties to Darth Vader.

The mid-cut Air Presto lends itself well to the Star Wars universe with a velcro and zipper opening that helps make it a believable footwear choice for battles across the galaxy. The Presto’s cage has always made it one of the more futuristic and dynamic of Nike’s shoes, but a long time ago in a galaxy far, far away is just as fitting of a setting.

Return of the Utility — The Air Presto Mid Utility was first introduced in 2016, 16 years after the first version of the innovative running sneaker. A few different versions of the more tactical and boot-like sneaker released in the first couple of years, but things have been relatively quiet for the Mid Utility since.

If anything, it’s surprising that the Air Presto Mid Utility went quiet at all. The past five years have seen highly technical clothing as an enduring trend, with former Nike ACG lead and Acronym founder Errolson Hugh as one of its greatest champions. At no point since the silhouette’s introduction could you say it’s been off-trend, and the unsanctioned Star Wars ties could bring even more attention.

Adidas’ official Star Wars collabs have been very hit or miss, but so far Nike has nailed its own take on the franchise. Reports indicate the two new versions of Air Presto Mid Utility will go on sale this fall for $150 apiece, and we hope even more character-inspired kicks are on the way.