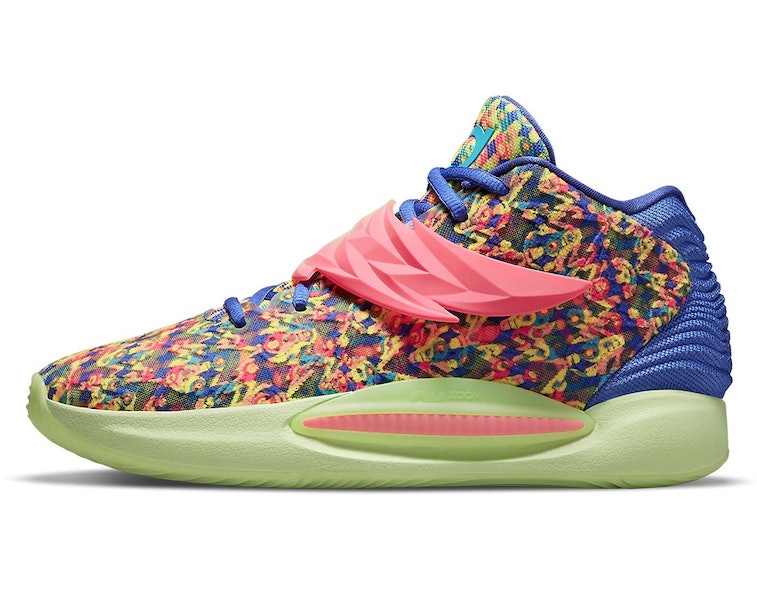 Nike has tapped the artist Ron English to tinker with the KD14, turning the basketball sneaker into something cartoonish for its first collaborative release.

English has retooled the KD14’s strap, which just came back to Kevin Durant’s line after a seven-year absence, into a sculpted wing with even more going on than you see at first glance. Turn to the sneaker’s medial side and you’ll see that the wings are like hair for an alien-like figure with massive eyes. There’s also more than meets the eye on the upper’s knit pattern, which could pass for a floral pattern but reveals smiley faces and skulls upon further glance.

Collaborating on a contemporary basketball sneaker is difficult because, even at their best, what performs best on the court is so different than what people want to wear in everyday life. It’s hard to say if English’s flourishes will be enough to give the KD14 lifestyle cred, but you have to admire what he’s done with the silhouette nonetheless.

More on English — English refers to his work as “POPaganda” and often morphs pop culture figures including Ronald McDonald and Mickey Mouse into something more sinister. Gluttonous consumerism is one of his recurring themes — which does make his decision to collaborate with Nike somewhat ironic.

Having previously collaborated with New Balance, Puma, and Vans, English is making his most visible foray into sneakers by working on Durant’s signature shoe. He also collaborated with Crocs earlier this summer on a “Party Animal”-themed capsule for the hottest and most comfortable footwear of the moment.

For now, English’s KD14 has only been confirmed for a release to go down Thursday, Sept. 2, in Japan. The URL for launch, which has now been deleted, suggests this sneaker could be the first in a series of KD14 collaborations — and we hope that at least one makes its way stateside and where basketball is still most popular.