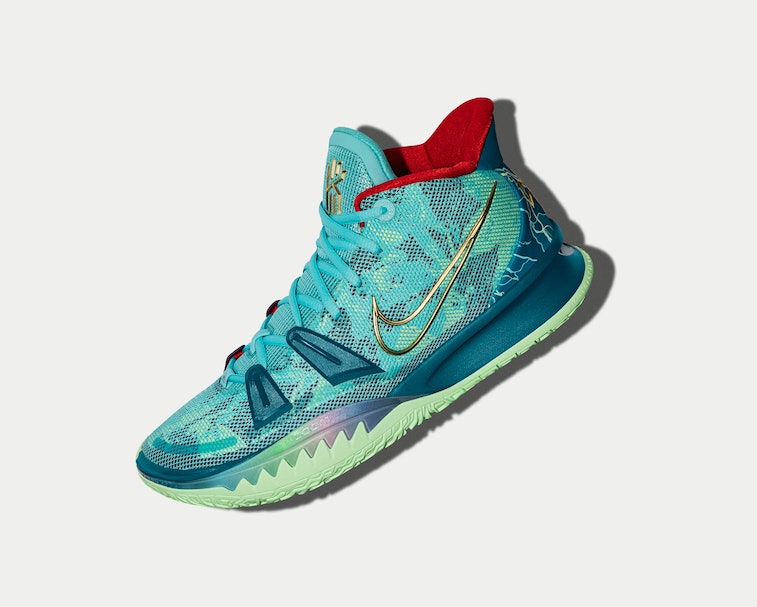 Brooklyn Nets' superstar Kyrie Irving missed most of last season due to injury, but the the next time he plays an NBA game he'll be wearing what Nike calls his quickest signature sneaker ever. Conceived by Senior Footwear Designer Ben Nethongkome, this new version of one of Nike's most popular performance basketball sneakers is 2.5 ounces lighter than the Kyrie 6. That's a significant weight improvement that had to be accomplished without sacrificing grip, which has been a standout quality of earlier models in the Kyrie line and what's helped make the silhouette so popular among players, both professional and amateur.

Quick, quick, like Kyrie — From the get-go, Nethongkome said in a media briefing that the goal with the Kyrie 7 was to build a shoe that would allow Irving to be the "quickest guy on the court," and that meant taking the best elements of his 4, 5, and 6 shoes and then make them even better. As part of that, he added, Nike had to try different methods of designing that included removing a bit of the heft from the Zoom cushioning bag, as well as reinforcing the zones where Irving needs the most support when he makes quick cuts on the court, and reinforcing the upper's mesh to have it be as strong as possible.

For the first time in the Kyrie 7, Nike also experimented with a data-driven design process to develop an outsole with better traction, which is said to offer more grip during "shifty, unpredicted" play. At the same time, beyond performance, Nethongkome said Irving wanted the Kyrie 7 to be a reflection of his creativity on and off the court and stand for what he loves. The result, as we've seen with the Kyrie 6 and others, is a sneaker that's sleek, bold, and at times, extremely loud (in a good way).

Colors and patterns — With the Kyrie 7, there are four key aspects from Irving's daily life that he hoped to get across, according to Nethongkome: art, film, music, and, of course, sport. The initial "Preheat" colors, for example, include a "Special FX" teal style (pictured above) that's inspired by Irving's love for films — in particular those from Steven Spielberg, which is why you'll see details like "scary" lightning and flashing lights graphics that are intended to pay homage to special effects in old-school movies.

Then there's the "Soundwave" Kyrie 7, which Nethongkome says is influenced by Kyrie's music fandom and features earth tones that are reminiscent of those used by one of his favorite artists: Travis Scott, who is perhaps Nike's most influential and hyped collaborator, right up there with Virgil Abloh. In addition to the Special FX and the Soundwave colors, Nike is rolling out the "Expressions" (art) and "Icons of Sport" Kyrie 7s, the latter of which pays homage to the late NBA legend Kobe Bryant, who passed away earlier this year.

All of the Preheat Kyrie 7s will cost $140 when they drop on November 11, though Nike is also launching a less colorful, mostly black version that's going to be $130 on November 16. You should expect even more designs of the Kyrie 7 throughout the year, too, and some of them may be even more wild than those you're checking out here right now.