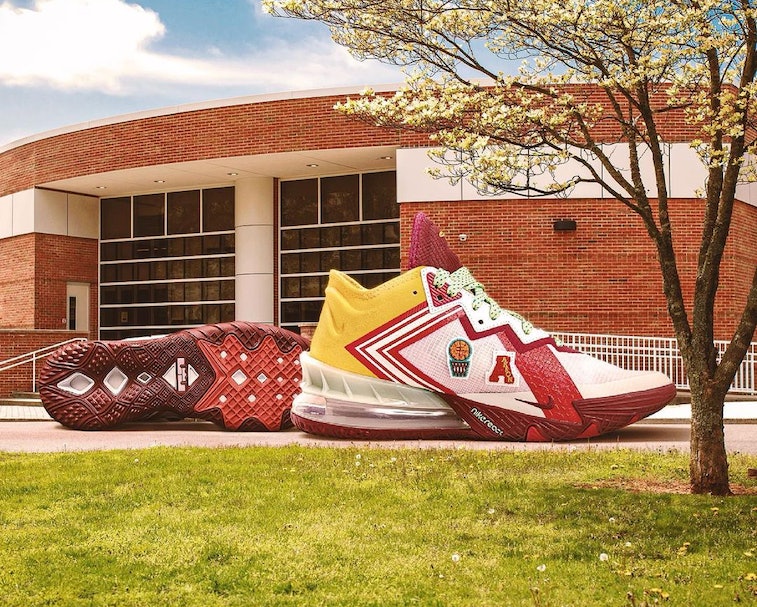 LeBron James is going back to school with a collaborative version of his Nike LeBron 18 Low. Designer Mimi Plange has taken inspiration from varsity jackets for the first of four sneakers she’ll release with James and Nike. The burgundy and gold sneaker is covered in chenille patches, including the Swoosh, to explore how letters served as a status symbol in high school.

With her collaboration, Plange becomes just the second female designer to work on James’ signature line of sneakers. According to a release, James is determined to add more diverse voices to his output — and the Ghanian-born designer brings a perspective distinct from other shoes he’s released. Plange grew up in America but incorporates her African heritage in her designs, which have primarily consisted of womenswear and have been worn by Rihanna, Serena Williams, and Michelle Obama.

“It’s amazing to shine a light where there hasn’t been enough light: bringing more voices into design,” Plange said in a release. “Having the space to speak a sense of self through design carries a lot of power.”

School spirit —  Instead of focusing on his alma matter St. Vincent-St. Mary, the LeBron 18 Low “Higher Learning” uses its patches for broader nods to James’ life. An “A” patch is a stand-in for his hometown of Akron, while a lion toying with a basketball is a fresh take on the animal that’s appeared throughout The King’s sneakers.

Varsity striping appears in an oversized V shape across the upper, and the only thing not to like about the shoe is the name. Why call it “Higher Learning” when it’s so clearly riffing on high school and not college? Still, the LeBron 18 Low looks mighty attractive here, especially considering how often basketball kicks fall short of the mark.

“Growing up, something I always loved going through school was a varsity style,” Plange said. “The varsity jacket was this ultimate attempt to explore identity. You could tell the story of everything you did in high school because you won your letters — for basketball, for track, for performing arts, for anything.”

The first of four arrives shoe — The LeBron 18 Low “Higher Learning” is slated to release June 2 through both Plange’s website and the SNKRS app. After that, Plange still has three more versions of the silhouette to unveil, and we can’t wait to see what else she has in store. Hopefully the African motifs signature to her own line make an appearance in at least one of the shoes.