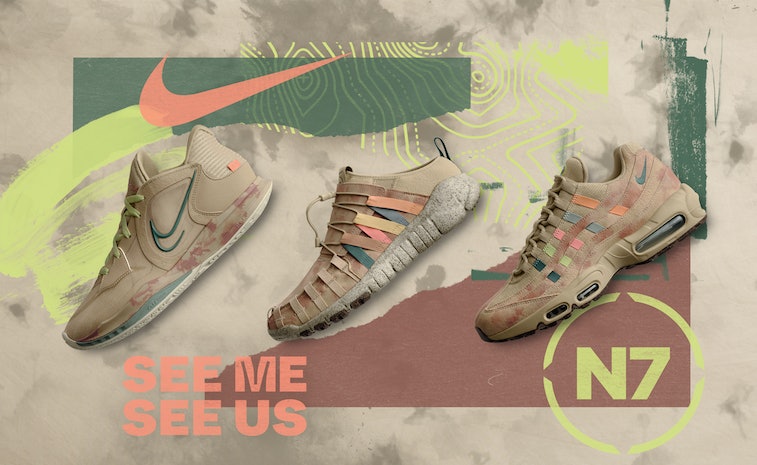 One of Nike’s strongest philosophies is that sport is for everyone, and in keeping with that notion, the brand has revealed its next N7 collection. Meant to inspire Native American and Indigenous youth to get moving, the capsule features footwear including the Free Crater Trail Moc and Kyrie 5 Low alongside accompanying apparel.

Nike’s first designs by and for the Indigenous community were released in 2007, and in 2009 Nike launched N7, a product line influenced by the Native American wisdom of the seven generations. This season’s N7 offerings draw influence from the northern territories and continue to explore the cultural significance of basketball for Native peoples.

A natural feel — Athletic silhouettes including the Air Max 95 and Kyrie 5 Low are among the collection’s footwear, with each decked out in colors and taping accents often seen in traditional Indigenous ribbon skirts and weaving techniques. Tan, orange, green, and muted purple shades all help to recognize the craftsmanship and detailing of women who wear the skies at ceremonies and other notable events.

For a more casual feel, Nike has also brought back the Free Crater Trail Moc, which features adjustable elastic laces and a treaded sole to keep each step comfortable and secure. Faded red, green, orange, and yellow weaving decorates the sides of the tan slipper for a minimal look.

Accompanying apparel takes on the same palette as the N7 footwear, while select styles boast colors inspired by natural dye methods that use berries. A lavender Nike Sportswear jumpsuit flaunts taping details as tan dresses a crossbody bag with hits of neon green. Both an orange long-sleeve tee and blue basketball shorts have been altered to look stonewashed, an effect contrasted by bright orange and green accents.

Yet the literal highlight of the N7 collection is a vibrant green tee which illustrates how basketball has become a modern expression of Indigenous identity. The shirt’s basketball hoop graphic showcases the sport as a bond for family and tribes, as well as a way to bring youth into sport.

Nike’s N7 collection launches on June 21 through the brand’s website, as well as through select Nike and Hibbett retail locations.

Supporting play and sport — To further build on the legacy of N7, Nike will also provide 13 organizations with a total of $625,000 in donations this year. This support arrives alongside the Nike N7 Fund, which works to connect Native American and Indigenous youth to play, sport, and physical activity programs. Since its launch in 2009, the Fund has awarded more than $8 million in grants administered by the Charities Aid Foundation of America to more than 270 communities and organizations. To Nike, the roots of sport are worth celebrating — and so is its future.