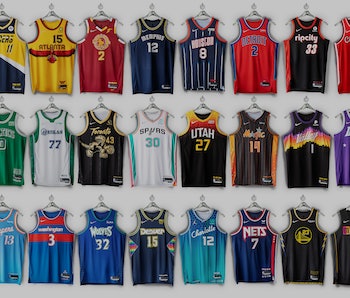 Nike has trotted out City Edition jerseys each year since taking over as the NBA’s official outfitter in 2017, but this year’s alternate uniforms take on special meaning as the league celebrates its 75th anniversary. And after several years of work, the two partners are ready to unveil the uniforms that serve as personalized mixtapes for all 30 teams.

While not altogether throwbacks, or precise recreation of past uniforms, the vast majority of this year’s City Edition jerseys incorporate beloved elements from their respective teams’ past. Every franchise worked with Nike to hone in on significant moments and looks from its history, from the Toronto Raptors’ first NBA Championship two years ago to the Boston Celtics’ striping and lettering from way back in the late ‘40s.

“The fun part is we learned so much about each individual team, what moments matter, and what it meant to build organizations,” Jesse Alvarez, director of product for men’s basketball at Nike, told Input in an interview. “No two stories are the same, and it gives us the chance to celebrate and make each team feel special.”

The highlight reel — Alvarez pointed to the Raptors black and gold uniforms as one of his favorite amongst the 30. The team’s cartoonish dinosaur graphic from the late ‘90s makes a return, and it’s wearing the same jersey that the Raptors wore as they won the 2019 title. The direction of the raptor has also been flipped, with the idea being that it’s looking back on the past while continuing to move into the future.

For the San Antonio Spurs, Nike is once again applying the team’s iconic “Fiesta Stripes” from the ‘90s. The color scheme was only used by the Spurs for its warmups in the ‘90s but still became a fan favorite before it appeared on a jersey for the first time last season. Also making an appearance on the Spurs’ shorts is the roadrunner logo from the Dallas Chaparrals, which was the franchises original name when it played in the NBA.

Also among the most likely hits are the Atlanta Hawks’ unis, which bring back the striping from its first uniforms in 1968 along with its massive wingspan logo from the '90s. The Minnesotta Timberwolves channel its debut uniforms as well while adding the “Forrest” font from the early ‘00s when Kevin Garnett was a part of the franchise. Appearing in orange to invoke the city's citrus economy, Orlando's pin stripe jerseys from the Shaq and Penny era also make a return. And as a Denver Nuggets fan myself, I’d be remiss not to call out the four-decade mashup that includes its widely beloved rainbow grid from the ‘80s.

All 30 jerseys will go on sale through Nike, the NBA, and other retailers beginning November 15 — with the teams free to trot them out on-court over the course of the season. And if we passed over your team, you can read more about each and every uniform through Nike.