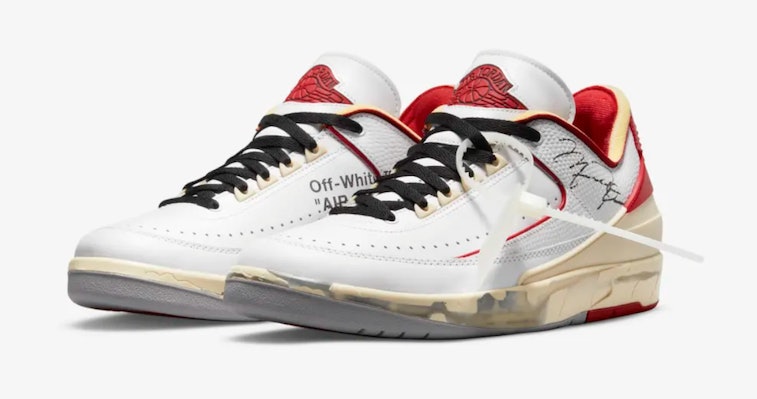 Keeping up with frequent Nike collaborator Travis Scott, Virgil Abloh has released a series of sneakers with the Swoosh this year, and teased more to come. After debuting an Air Jordan 5 and women’s Air Jordan 4, the designer’s Off-White label is now moving onto Nike’s Air Jordan 2 Low model, offering two shades of the sneaker.

This year marks the 35th anniversary of the Air Jordan 2, which first debuted in 1986. Created with high-end luxury in mind, the sneaker was known for its rich leather upper, lizard skin-style detailing, and noticeable lack of Nike’s Swoosh. Here, Off-White has kept the traditional features of the Air Jordan 2 Low, while ceremoniously adding Michael Jordan’s signature to the design — recalling how he'd sign his own pairs and give them away to kids after games. The autographed detail is a first for the model and any of Off-White’s previous collaborations.

Better with age — Abloh’s rework of the iconic sneaker arrives in two color palettes; one bearing a white base with red accents and the other black with blue accents. Both shoes flaunt Off-White’s signature sans serif font branding, marked “shoelaces,” and exposed foam collars. Abloh’s infamous zip-tie lace attachment decorates the white AJ2 in a luminous cream, while it makes more of a statement on the black sneaker, dressed in bright orange.

Back to the ‘80s — To further commemorate the the 35th anniversary of the silhouette, Off-White and Jordan Brand worked together on an accompanying apparel capsule. Basketball clothing, tees, hoodies, caps, shorts, trousers, and more T-shirts — sporting vests already superimposed on them — are set to release alongside the sneakers. In retro fashion, the green and gray apparel features reflective details and a hefty amount of windbreaker material, as well as Off-White and Jordan Brand motifs.

Both Air Jordan 2 sneakers and the clothing capsule launch on November 12. Available on SNKRS — and globally via Atmos — the commemorative shoes retail for $250 each, solidifying their collectible status. There’s no better way to celebrate the 35th anniversary of the Air Jordan 2 than buying another pair.