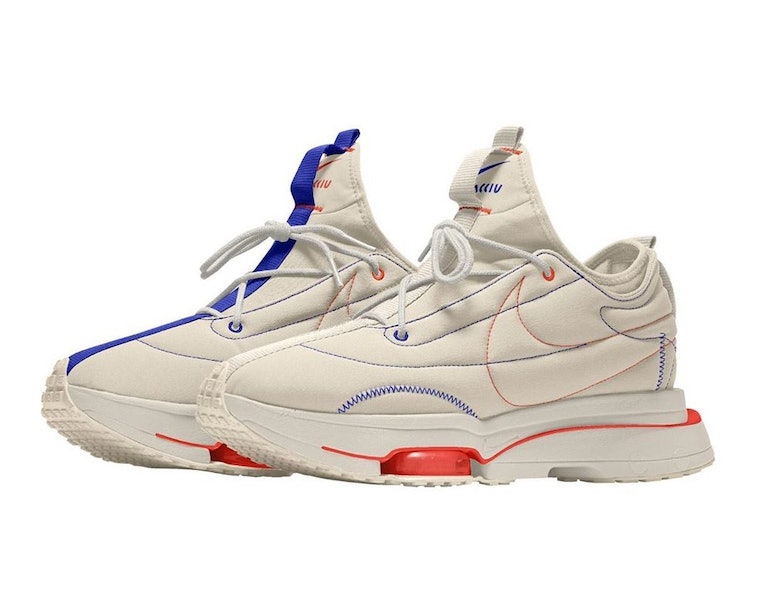 Nike has enlisted the Japanese graphic designer Macciu for a unique collaboration, using her design as a jumping-off point for customization.

The new Air Zoom Type Macciu By You is the latest spin from Nike's N. 354 line, which reimagines existing models by bringing hidden design features to the surface. Deconstruction has been all the rave ever since Nike began collaborating with Virgil Abloh. What makes this collaboration unique is that it isn't set in stone. Typically, Nike only allows customization for its core models.

A long tongue and exposed stitching — The stripped-down and flipped inside-out aesthetic of the Air Zoom Type Macciu ends up looking like something of a pillow. An elongated tongue makes the sneaker swell even more, as does the nylon replacing the typical suede for the upper. If you told me these pups were filled with down, I'd have no reason not to believe you. They're just a step short of The North Face booties I wear as house shoes during the winter.

Branding is kept to a minimum, with the Swoosh reduced to a stitched outline to match that replaces the upper's overlays. Macciu's name appears underneath another Swoosh atop the tongue, both of which are obscured by a pull tab. Inside the tongue, "Choice = Possibility" is written out for the left shoe while a decision tree appears on the right.

"When I first saw the prototype, I was convinced that the graphics shouldn't be there," Macciu said in an interview with iD Japan (translated to English). "This sneaker was perfect from the beginning and was already 100% work. So, to maximize its beauty, I chose to keep the graphics to a minimum.

Meant to be destroyed — Macciu also noted that choice of nylon was made intentionally to invite dirt and scratches, inspired by a phrase her grandmother used to say invoking the fragility of things. "This delicate material embodies a stance that is not obsessed with the present and is flexible to all possibilities and the unknown world," she said.

In less heady terms, beat these things up! Don't be that annoying sneakerhead who treats their sneakers too preciously.

Exclusive to Japan — With the silhouette decided, the colors are ultimately up to you. Customers can create their own pair through Nike By You, but only on the Japanese website. Fret not if you don't live there, for proxies are your friend. We've got a guide right here to eliminate the barriers of Japanese shipping policies.